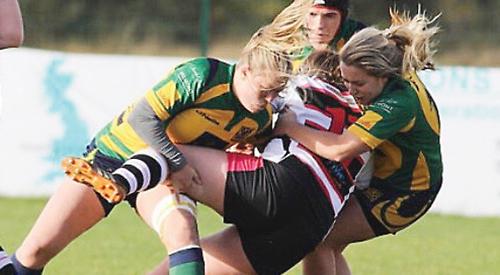 HENLEY Women put in a strong performance as they came away with a bonus point from their defeat at Thurrock on Sunday.

The visitors kicked off and Thurrock used strong runners to try and break out of their half. Solid Henley defence frustrated them and led to a scrum. Thurrock showed their power and took the ball to attack again and while trying to shift it wide, Wheeler intercepted and grubbered the ball ahead for Moody and Humphreys, who almost won the race to touch down.

Thurrock took a quick 22 drop out and worked with phases up to halfway before working it wide quickly and breaking through to score out wide.

Thurrock knocked on the restart and from the scrum Dudding found clear air to come within five metres of the try line but the Henley attack couldn’t break through and Thurrock cleared their line to half way.

After building phases up the pitch, and ill discipline from Henley, Thurrock chose to take a scrum five metres out and forced the scrum over the line, close to the posts but couldn’t convert the try.

From the back of a scrum, Dudding put pressure on the nine and ripped the ball. Quick ball for Davidson allowed her to shift it right, and quick hands from props Barrett and Matthews got the ball to Humpreys who charged down the wing. In the tackle, she freed her hands to offload for Wheeler in support who sprinted to the line from the 22. The try was unconverted.

After half-time, Henley came out with intensity and put early pressure on the Thurrock line. Strong runs from Matthews, Balmer and Collins put Henley close and Moody was stopped short after cutting a good line. Henley couldn’t convert the pressure and Thurrock used their speed and caught the visitors on their heels.

Conceding penalties close to their line, Henley couldn’t organise quickly enough to stop the quick tap penalty and Thurrock charging under the post. The try was converted to put the hosts 17-5 up. Henley were undeterred and rattled Thurrock through continuous pressure at rucks with Hearn making crucial turnovers and Wheeler stealing line-outs. The Henley bench made a significant impact, with Van Der Grient, Krabbe and Ashman having a positive effect on the scrum.

Quick switches in play led to breaks down the wing from Dudding, Hearn and Humphreys. Thurrock were pushed back into their own 22. After kicking a penalty to the corner, Wysocki-Jones threw perfectly to Nash, in the middle of the line-out and Henley packed a perfect driving maul, with added support from the backs, and Wysocki-Jones grounded the ball over the line. Humphreys narrowly missed the conversion to reduce the arrears to 17-10.

A frustrated and aggressive Thurrock came back strongly and worked their way back to the Henley try line. After choosing another scrum on a penalty, they couldn’t force the Henley pack backwards and were forced to shift the ball and score out wide to move 22-10 ahead.

Henley put up defiant defence for the remaining four minutes as Thurrock went hard, aiming for a fifth try and bonus point. The Hawks held strong and the game ended 22-10, with Henley scoring their most points ever on the road against Thurrock and coming away with a bonus point.