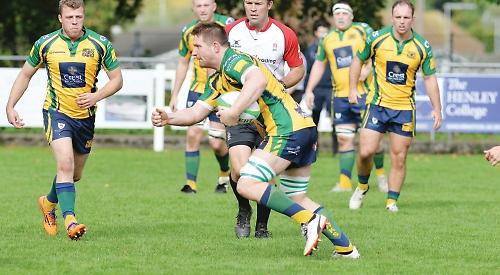 WITH Storm Brian taking hold on Saturday afternoon it was obvious that Henley needed a solid 80 minutes of concentration to overcome a battling Wimbledon side looking for their first win of the season.

Ultimately the Hawks served up about 60 minutes of some of their best rugby of the season. In the period immediately before and after half-time a competitive home side scored four tries as a result of Henley’s errors.

However, the visitors got off to a tremendous start pressurising the home line for skipper Jake Albon to charge down and score with just four minutes on the clock and into a strong wind Jackson hit the conversion. No sooner had Henley retrieved the kick-off when Alan Awcock seized on an opening in the defence and a strong run of 40 metres saw him score wide out with Jackson once again converting.

At this stage Henley were producing some sublime handling and the attacks were relentless so much so that within 19 minutes they had secured the try bonus point with further scores from Hyde after a successful driving maul and Portland finishing a fine backline move.

Further scores should have been converted as openings were created only for the final pass to go astray or missed overlap opportunities not delivered. However, a comfortable lead had been established and the first 30 minutes had been executed pretty much as Henley wanted given the difficult conditions.

It was at this point that the visitors allowed a lively home pack back into the game with some basic defensive errors and misunderstandings. The visitors were especially effective at the pick and drive game and this rewarded them with two tries before half-time. Either side of these scores Brad Cooke was again on the score sheet with good support play to touch down for his third try of the season.

With a half-time score line of 31-14 in Henley’s favour the travelling faithful might have thought that with a strong wind at their backs the visitors would push on for a record score. However, a simple error from the kick-off saw Wimbledon pressure and some good handling saw them reduce the lead to 10 points with a well taken try and conversion.

The nerves started to jangle once more as a defensive error allowed the home side to once more penetrate the defensive line to gain a penalty and from the resultant line-out the forwards were driven over. The lead was now only five points.

This was as good as it got for the home side as Henley settled and introduced some fresh legs. Both Tibbatts and White were introduced to the forwards and both played significant roles in taking the game to the visitors and putting a stranglehold on proceedings. Further tries were scored by Awcock, Primett, Tibbatts and Jackson who also added two more conversions. The home side, who had defended passionately, were now exhausted and Henley ran out comfortable winners. In addition John Wunder returned for his first game since injury in week one and debutant Morris produced a solid display in the front row while David Clements played his 200th game for the club in what is a significant achievement in the modern game. Clements work rate and tireless contributions over the year have been truly remarkable.