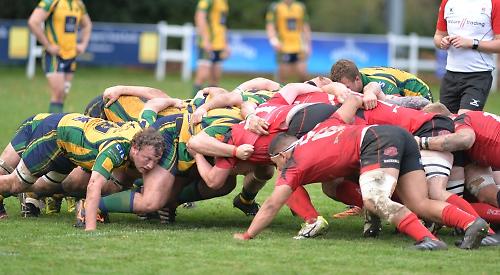 This fixture usually throws up a close, tight contest and although it probably wasn’t the strongest Redruth side ever to visit Henley, the visitors were too well organised and efficient this time led by wing forward Sam Matevesi.

They made few errors compared to the Hawks side whose effort and commitment against one of the better sides in the league cannot be faulted but they seemed to lose belief as the game went on as their defensive issues and basic errors began to surface.

Redruth made their intentions clear from the start when Matevesi cut through the Henley defence to score after just three minutes. Ashley Hosking converted.

The Hawks responded immediately, playing with good intent and capitalising on a rare Redruth error. A loose pass was pounced on by Marcus Lowe who showed some good skill in fly kicking the ball through before dropping on it to score the Hawks’ first try.

Henley were looking good at this stage and were at their most dangerous when the forwards took the game to their visitors, keeping the ball in hand. They scored again quickly afterwards through Dave Hyde who finished a good move orchestrated by Joe Morris and then Joe Butler. George Jackson converted.

Redruth began to get themselves back into the game and scrum half Connor Swan almost scored but was halted by a try-saving tackle by Dave Hyde.

The Hawks forwards, as in previous weeks, were playing well with captain Jake Albon, Tom Emery and the back row of Dave Hyde, Marcus Lowe and Scott White industrious. A great move allowed prop Brad Cook to break clear but a try opportunity was missed as the final pass went astray.

As the game went on, the Hawks’ attacking play became prone to similar errors and this was to be their last real threat to a positive result.

Eventually, Cornish pressure told and a penalty from Hosking was followed by a try for Royal Navy captain Ben Priddey as he finished a driving maul. Hosting again added the two points.

Henley responded with a fine line-out drive of their own, led by Dave Hyde, winning a penalty for Jackson to reduce the arrears.

Hosking replied with a penalty of his own to give Redruth a 20-15 lead at the break.

The Hawks were in the game at half-time but any chances of extending their unbeaten run were quickly dashed as Redruth went on to dominate the second half. The visitors scored shortly after the break when Neil Webber created space for Matthew Bowden to break some weak Hawks defence and score in the corner. Hosking converted.

After some positive results in recent weeks, Henley’s conviction seemed to disappear and their defensive frailties once more began to be exposed. There were also creaks in the ever reliable line-out and that halted promising Hawks attacks on more than one occasion.

In space, Liam O’Neill looked dangerous but the Hawks frustration was further compounded when they received a yellow card for talking back at the referee.

To their credit, the Hawks never gave up and with the game opening up in the final 10 minutes, a Hawks attack involving some good passing allowed centre Alan Awcock to score a try which Jackson converted. Henley immediately gave away a penalty from the restart which Hosking put over for the visitors to keep them more than two scores ahead. Redruth completed victory in the final minutes when another Hawks attack broke down and the visitors counter attacked and finished with hooker Richard Brown scoring in the corner to complete the Cornishmen’s victory.