Hawks quick off the mark as league leaders are toppled 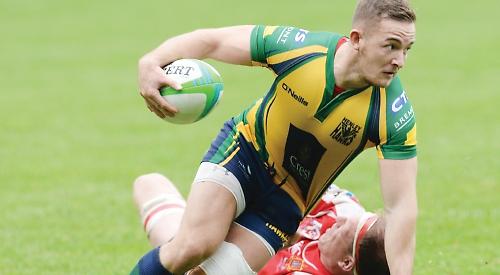 HENLEY HAWKS produced their best performance of the season by some way to topple the league leaders and in turn take their unbeaten record start to the season last Saturday.

In front of a large partisan crowd Henley took to the field in determined fashion and were on the score sheet after eight minutes when a searing break from Joe Butler saw him carve open the Titans defence and give an inside pass for Marcus Lowe to run hard for the line. Jackson converted.

It then got even better as a series of punishing attacks and good continuity play from the forwards saw Hyde break the line and dive over midway out for Jackson to once again convert and stretch the visitors’ lead to 14 points after only 11 minutes of play.

This barrage of Henley attacks seemed to spur the league leaders into action but they met a resolute defence with Wunder and Primett outstanding, driving the visitors back time and time again.

Henley further increased their lead as a breakaway in midfield was halted illegally and Jackson converted a good penalty opportunity. With a 17 point lead inside 14 minutes Henley could have relaxed but the intensity remained although a defensive lapse saw the home side reduce the lead to 10 points as their captain ran a good line to score midway out. Although there was a stiff breeze blowing straight down the pitch Henley were determined to keep the ball in hand and ran a good move from deep in their own half for Jack Robinson to race 40 metres to touch down wide out. Jackson’s impressive touchline conversion went sailing between the posts. After a frantic start Henley had scored 24 points in 22 minutes and this was to prove decisive.

Taunton replied with a try 10 minutes later to reduce the arrears but the significance of the next score was huge. Henley were rewarded with a penalty just inside their own half. The angle was tight so a kick to the corner was not really an option. There was suggestion that they tap and kick the ball into touch to finish the half but up stepped loose head prop Brad Cook to kick the penalty 55 metres with plenty to spare to send the Hawks in at half-time 27-12 ahead.

It was important that Henley started the second half well. In recent weeks the focus has dropped at the start of the second period. However they could not have wished the second half to have started better as they retrieved their own kick-off and quick hands from Butler saw Liam O’Neill sprint for the line to score midway out. The difficult conversion kick was missed but most importantly the lead stretched once again.

Taunton were not finished and came back strongly to put the visitors under pressure at scrum time which resulted in a try for the number eight as Henley were reduced to 14 men as Dave Clements was sent to the sin bin for a ruck offence. The see saw nature of the scoring continued as Henley were running into a stiff wind and kicking would have been fruitless. This brought dividends as forwards and backs alike played a high continuity game causing breaches in the Titans defence which enabled Andre to score wide out and relieve some nerves.

The final nail in the coffin was perhaps the best try of the day as Emery broke clear and a series of quick recycled ball saw Lowe go over for his second try with seven minutes remaining. A consolation try from Taunton in the dying minutes wrapped up the scoring on what was a fine afternoon for the Hawks in which Jake Albon was named man-of-the-match for his relentless work around the field and captaincy.

Whilst many were openly surprised by the result those in and around the team knew this type of performance was just around the corner. The real test is now if the team can provide the consistency as they move into the second quarter of the season. With a tough home encounter against Bury St Edmunds this week they will have to replicate this performance to ensure success.

In the meantime the Hawks will enjoy this success and move forward with more confidence. As a footnote the away support was tremendous and the vociferous Henley spectators made the long journey home in buoyant mood.