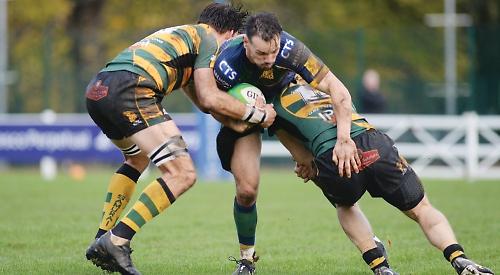 Bury St Edmunds started strongly and should have scored in the second minute but a knock-on from scrum half Harry Anderson-Brown gave Henley a lucky reprieve.

The visitors quickly got the ball back following a Henley error and took the lead with Anderson-Brown burrowing over to make amends for his earlier mistake. Henley battled back with Jake Albon crashing over following a good driving maul. George Jackson slotted the conversion to take the scores level.

The visitors deservedly retook the lead on 15 minutes when a Henley defensive line-out was overthrown. Sam Bixby was the quickest to pounce on the loose ball with Honey converting to make the score 14-7.

The Hawks started to get a foothold in the game with Butler and Perry looking dangerous. A line-out steal from Albon put the Hawks back in the visitors’ 22 and a fine Butler grubber kick saw Jack Robinson quickest to the ball to dot down. Jackson converted from just inside the touchline to level the scores at 14-14.

Five minutes before the break saw the Hawks take the lead for the first time, a Jackson penalty taking the score to 17-14 at half-time. The second half began in a similar vein to the first with Bury St Edmunds on the attack. A monstrous Fraser Honey penalty drew the scores level before a similarly long-range effort saw the visitors retake the lead 20-17.

The last 20 minutes saw the Hawks play some good rugby as they patiently went through the phases before the outstanding David Hyde crashed over from close range. Jackson’s conversion saw the Hawks go 24-20 up.

Play was held up for 10 minutes on 75 minutes with Bury St Edmunds replacement Sean Davis stretchered off with a neck injury. When the game restarted Henley won a penalty which saw Jackson kicking the Hawks into a 27-20 lead.

The last few minutes saw the Hawks hold on with a solid defensive display which repelled any potential Bury threat.

Overall, it was a good performance against a side that have been playing with real confidence as the Hawks now go into a rest week following two hard fought victories.

Next up is Canterbury away on November 25 followed by Clifton at home on December 2.