Mixed fortunes for Hawks before taking to Madejski pitch 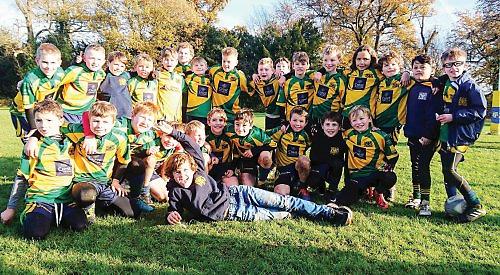 HENLEY HAWKS U10s had a unique day out with London Irish culminating in watching the Premier League match against Bath at Reading’s Madejski Stadium last Sunday.

The event included a mini tournament comprising two pools, each with five teams after which the teams made their way to Madejski Stadium where the Henley players had the opportunity to spend some time with London Irish players ahead of playing the role of forming a tunnel for the Premiership teams as they ran on to the field at the beginning of the match.

In the tournament, both Henley teams played four matches each, winning three, drawing three and losing two. Henley showed good skills in running straight, passing out of tackles, mauling where they managed to steal a number of balls and in tackling.

The first Henley team played four matches where they beat Alton, drew against Devizes and Reading and lost to Melksham.

Each game was highly competitive with Henley showing good teamwork with ever improving skills and confidence. The first game set the tone for the tournament as Henley produced good interplay from Rory Cordingley and Ethan Shuttleworth, with direct running from George Bottomley to smash through tackles and take a 2-0 lead. Reading fought back and managed to sneak a draw with a last minute try.

Next up was the toughest game against Melksham. Henley produced a good team try involving great rucking from William Tavinor, with Dominic Pusey-Arsyad creating space for a good finish in the corner by Freddie Coultas. However, Henley were outfought in the rucks as they lost 3-1.

The third match started on a similar track with strong rucking and direct running from a huge Devizes team to be trailing 3-1 at half-time. Good cover defence from Charlotte Tong regained possession and a good contribution from newcomers Josh Turner and Jake Robinson in the second half brought about a good comeback to secure a 3-3 draw.

The team continued the positive team display into the final match against Alton, where they scored 10 tries in the 12 minute game, including an arching length of the pitch run from Lucas Edwards. There were also two solo runs from Luca Coleman, two tries from Felix Cooper, and a second half hat-trick of defence splitting runs from Thomas Ferguson.

The second Henley side played four matches, won two games against teams from Reading, drew against Tadley and lost to Overton.

Against Tadley the Henley team had the upper hand for the whole of the match with lots of possession which was mostly in their half with strong running and plenty of offloads but they were unable to get through for the killer blow as Tadley’s defence held firm as the match ended 0-0.

Next up against Reading 2nds Henley opened up their running style with Alexander Clarke, Seb Phyllis and Ben Chapman cutting through the Reading defence with ease to record a 4-1 win. The work rate of Robert Murdoch was exceptional with some barrelling straight runs and offloading to the likes of Felix Richardson and fast Leo Golledge.

The third game saw Henley put Reading 3rds to the sword with ease. Jack Bradbury stepped strongly to score a try at the end of a run and offload from Ben Chapman. Felix Richardson used his pace and power to go in from a long way out as did Leo Golledge. Olli Butler, playing in his first tournament, showed strong promise while Alistair Hall used his strong rucking and tackling to great effect and Henry French ran well.

In the game against Overton, it was a similar story. Henley drew first blood but Overton were able to come back, scoring twice before the end of the game. Sam Snowdon and Ed Tong got stuck in against a tough opposition.