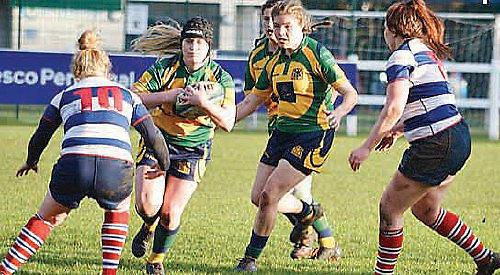 The hosts started brightly with a hard run from Barrett and Wysocki-Jones allowing a good platform for the backs. Swinging play from one side of the pitch to the other and quick hands from the entire back line led to Solowin opening the scoring as she touched down the first try. Humphreys converted to make it 7-0.

From the restart Wheeler carried well as Krabbé and Matthews smashed through the Sheffield defence. Once again Henley found themselves meters from the opposition try line only to lose the ball. This gave an opportunity for the forwards to test the Sheffield pack in the first scrum which was well defended by Henley who had the upper hand.

Sheffield were desperately trying to exit from their own half but were struggling to break through the Henley defence.

Following a scrum close to the line Moody joined the line from fullback to run in hard where quick recycled ball fell to Solowin to touch down. Humprhreys converted again to put the Hawks 14-0 up.

After a kick to touch, Sheffield had the ball but a steal from Solowin saw the ball back in Henley hands. A break from Collins put Henley on the front foot with good support from Dudding who fed it to Wheeler to score under the posts. Humphreys added the extras to make it 21-0.

Following a good spell by the visitors the Hawks began to kick for territory and found themselves back in the opposition 22. A good line-out throw to the back with great precision from Wysocki-Jones allowed Nash to safely secure the ball for the backs, who in return carried out an impeccable move and allowed Moody to run in untouched in the last play of the half to make it 26-0.

Early in the second half a turnover allowed the Sheffield fly half to boot the ball down field only for her fullback to gather from a bounce catching all the Hawks off guard as she ran 50 metres to score under the posts. With the successful conversion the score was now 26-7. Replacement Craig made a big impact with her first touch of the game as she stole some yards. The hard work paid off and Davidson scored in the corner for her first Henley try to make it 31-7. The conversion was unsuccessful.

A good run down the line after the restart saw Wysocki-Jones get past five players before being halted.

A big hit from Simpson with her first play of the game saw Wysocki-Jones go on another good run. Moody and Thompson gained the yards and Simpson pushed it over to score Henley’s sixth try of the match. The conversion was missed.

Sheffield never gave up and continued to test the Henley defence and repeated offsides gave the referee no choice but to sin bin a Hawks player. Now playing against 14 the visitors were pressing Henley in their own half but good tackling kept the visitors at bay.