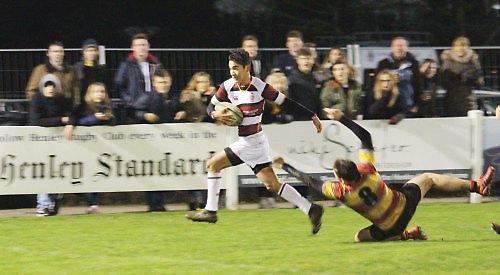 Lord Wandsworth kicked off and Shiplake found themselves defending early on. A poorly timed late hit in the first minutes of the game resulted in a yellow card and the home side going three points down.

Shiplake, now a man down, were struggling to find ways through their defensive line.

Both sides were knocking the ball on often whilst the players got to grips with the greasy conditions. Shiplake’s line speed put pressure on the Wandsworth attack and it wasn’t long before they had a scrum inside their 22. Off a set play move it led Louis Ashcroft to dive over the line for the first try of the game. Joe Booth converted.

Shiplake were now 7-3 ahead, slowly gaining confidence and the back line were managing to gain a lot of yards in the wider channels of the field. However, the penalty count was high and it soon cost them again before the half-time whistle sounded.

Wandsworth applied pressure in the first few minutes of the second half but Shiplake managed to turn the ball over inside their 22. Shiplake launched the counter attack and quick ball down the short side meant Harvey Hendry could weave his way through the broken field. Ashcroft was in support and a pass back to Hendry resulted in a score. Booth converted the extras.

Playing with confidence Shiplake started to get into their stride and were looking a lot livelier than their first half performance. Ben Stacey was next to cross the line in the corner after the forwards ran a zig-zag and found themselves with an extra man on the blindside.

Substitutions were made which brought energy on to the field keeping the squad going. Shiplake benefited from the wide pitch with the pace in the back three and this soon was shown after a loose ball was passed out wide for youngster Rory Diez-Harrison to dive over the line to add to the score line. Booth converted to make it 26-6.

With just a few minutes left to play, tensions were high and another discipline issue led to the second yellow card for Shiplake. This added unnecessary pressure on to the hosts and Wandsworth capitalised on the extra man and managed to secure a try for themselves through a pick and go to make it 26-11.