Hawks lose out by point as final kick rebounds off post 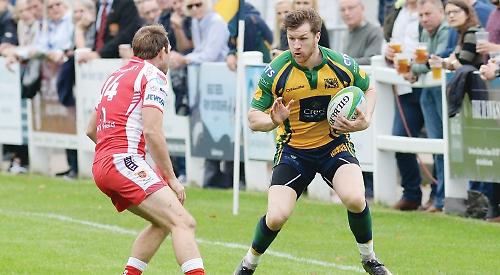 HENLEY HAWKS were pipped to the post by a single point after failing to convert their fourth try in the dying seconds of their Division 2 (South) clash with rivals Canterbury on Saturday.

Scrum half George Jackson’s kick from the touch line rebounded off the near upright, despite having converted two other chances from similar positions.

But the galling point as far as the Hawks were concerned was that they had been disallowed a try minutes before from in front of the posts for a foul which would have made a conversion attempt a formality.

The game started on time but only after the Hawks had a tedious journey which delayed their arrival with little more than an hour before the scheduled kick-off time.

This may have been a contributory factor to a typical lethargic start by the Hawks for they were five points behind after Canterbury stormed to their line for flanker Jamie Stephens to be driven over from a line-out.

This was after a frenetic start accompanied by an overture of whistles by referee Robert Bourke, who within one minute of kick-off, had given yellow cards to Hawks’ lock Dave Clements and Sam Kenny of Canterbury.

The visitors, to their credit, recovered from this debacle the quicker and started to show the form that had brought victories against good opposition in their last two matches.

They dominated possession and drove forward at every opportunity. This gave opportunities to use the ball in hand with confidence and to press the home defence, spreading the ball wide with accuracy.

This was exploited in the first case with the forwards able to put their lively prop over for a try, converted by Jackson after just seven minutes nudging them into a 7-5 lead.

The Hawks continued to harass the Kent defence with passing movements out of their own territory and by refusing to kick to give possession to the opposition. They also did well in the set scrums, earning three penalties, but were less secure in controlling the ball in their line-outs.

The return of Sam Portland in the centre after four weeks injured was important as his pace stretched Canterbury and after 30 minutes he got his reward when he ran through from over 35 metres to touch down for Jackson to add the conversion and put the Hawks 14-5 ahead.

The Hawks continued to dominate and as half-time approached crafted the best try of the game when O’Neill glided through to make the score 19-5 at half-time.

After the break a rejuvenated Canterbury took the initiative and rapidly ate into the Hawks lead.

Harry Sayers added an unconverted try and then flanker Stephens crossed for his second for Ollie Best to convert and when he added a penalty the Hawks were now one point in arrears at 19-20.

This was followed by a try by winger Barney Howard, who collected a cross kick after Canterbury pressed near the posts, to lead 25-19.

Hawks then recovered their poise as Portland made a storming break into the Canterbury half. Then, having failed to regain the lead with a try at the near posts, they swept the ball to the right wing where flanker Rob Bell squeezed over for a fourth deserved try for a Hawks side which produced the best rugby of the game.