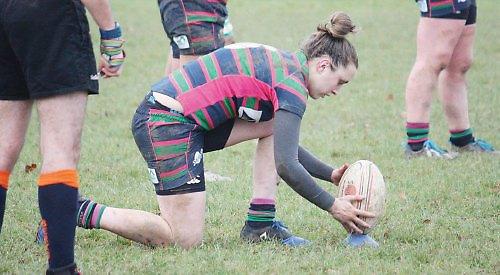 ABBEY NUNS scored six tries as they leapt back to second place in Championship South West 2 with a convincing 34-7 victory over Drybrook, writes Fiona Tomas.

Hayley Matthews, Annette Tomas and Hollie King all continued their fine try-scoring form as the Sonning side kept up the pressure on their Berkshire rivals Newbury Ladies at the top of the table.

It was a dominant attacking performance which showcased the very best of Abbey’s expansive rugby, typified when winger Gabriella Millard opened her account in a first-team Nuns shirt.

But Drybrook’s consolation try at the death denied the Nuns a clean sheet – in what otherwise was a near-perfect performance as Jack Reynold’s side made it six wins out of seven this season.

It was a strong start from Abbey, who controlled the game from the off through forward carries, with Tomas and Annabel Hawkins probing Drybook’s defence with tactical kicking.

Matthews stormed over for Abbey’s first early on – a score which demonstrated the Nun’s cohesiveness after several quick hands combined to find the centre, who has continued to impress since returning from a lengthy spell on the sidelines.

Tomas squeezed through a gap for Abbey’s second as the home side kept their Gloucestershire opponents pinned in their own half, with Hawkins adding the extras.

A series of penalties after Drybook’s indiscipline led to a well-constructed forward move which saw King crash over from close range at 19-0.

And the Nuns finished the first half with a textbook try, stretching the visitors as winger Millard dotted down for her maiden try in a first-team league game.

The second half saw Abbey play a more territorial game, with flanker Abi Wall making some outstanding breaks as the hosts chased the bonus points. Matthews added a second – executing a well-timed mover after Louisa Burgham’s quick hands fed her fellow centre for a 29-0 lead.

The commanding score line prompted Abbey coach Jack Reynolds to experiment with two impact subs as prop Molly Wells and flanker Katherine Sheppard entered the fray. Tomas was the provider for Abbey’s sixth, who dummied to wrong foot her outside woman to once again penetrate Drybrook’s defence and finish under the posts at 34-0.

But Drybrook stole a consolation try in the closing minutes, despite some valiant defending from Jess Potter and Joey Fowler, to rob Abbey of an almost-certain clean sheet.