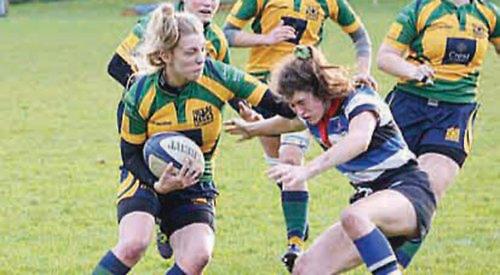 HENLEY Hawks Women ran out winners at Bath on Sunday.

Going into the match Bath were just below Henley in the league, by three points, with almost an identical playing record this season.

The early pressure came from Bath, whose rapid winger went round the Henley defence and dotted down under the posts and with the conversion put the hosts 7-0 up.

Henley attacked straight from the restart, building phases up the pitch. Fast ball at the ruck allowed the backs to run hard lines and when the ball found its way to Moody coming into the line from fullback, she used her pace to score an unconverted try in the corner. Henley increased the pressure, with strong runs coming from Collins, Wysocki-Jones, and Krabbe, and the backs releasing Wilkie’s speed on the wing to make ground.

Bath found themselves on the back foot and penalties given away in their own 22 and the quick thinking of Davison at nine allowed her to dart over from five metres out. This try was also unconverted as the Hawks led 10-7.

Inconsistent refereeing was frustrating both sides and Bath were showing their experience by pinning the Hawks back with long kicks. With the pressure building at the end of the half, Henley took the opportunity for points and Hearn kicked a penalty to take the score to 13-7.

The Hawks increased the tempo at the beginning of second half. Wheeler made ground off the back of the scrum and linked well with Williams bringing pace off the substitutes bench. After Dudding ripped the ball in the middle of the pitch, quick hands wide allowed Wheeler to force her way over the line for an unconverted try.

Bath fought straight back, and after a scrappy line-out they picked apart the Hawks’ uneven defensive line and scored outside the posts.

Henley immediately moved up a gear, fluid offloading between the forwards and expansive passing from Dudding and Craig exploited the tiring Bath defence. Balmer and Thompson were making an impact with strong tackles and hard yards.

Using multiple lines of attack the Hawks worked their way up the pitch again, Matthews and Barrett running harder than Bath could tackle. Davison spotted an overlap on the blindside and popped the ball to Moody who scraped to the line for her second to make it 23-12.

With the try bonus point in mind, the Hawks ran hard from the kick-off and settled again in the Bath 22. Switching the play constantly meant the Bath defence couldn’t keep up, and a quick swing to the right put Solowin in enough room to power through tackles and make the line.

Focused on coming away with something, Bath pressed again and took the opportunity from a line-out in Henley’s 22, for their fly half to drop a superb goal, taking the score to 28-15 and securing them a losing bonus point, as the Hawks’ last attack faltered before the line. Craig’s wide and accurate passing won her the vote for players’ player, and Solowin transferring her skillset to the wing earned her coaches’ player of the match.

The five point win takes the Henley Hawks Women to just two points behind third place in the league.