Henley sides miss out on place at Aviva Premiership final 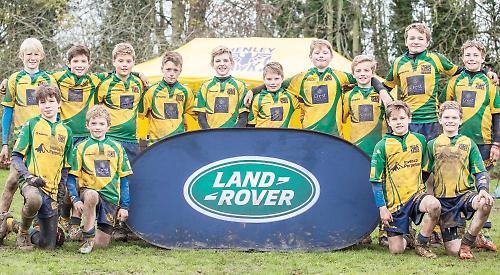 YOUNGSTERS from Henley Rugby Club played a part in creating history as they participated in this weekend’s Land Rover Premiership Rugby Cup, hosted by London Irish.

Since being launched during the 2008/09 season, the nationwide grassroots rugby event has seen more than 70,000 children take part.

This season sees the 10th anniversary edition of the event – the ‘Testimonial Season’ – with London Irish hosting a festival at Henley’s Dry Leas on Sunday.

Henley U11s were one of more than 30 U11 and U12 teams in attendance, and even got the chance to strut their stuff in front of a host of London Irish players, including academy star Tom Parton.

And while they missed out on the chance to attend next May’s Aviva Premiership final, despite their displaying plenty of skill and effort, 10-year-old Will Corbett insisted he had loved every minute of the experience. The youngster said: “We knew that this tournament was coming for about a month and we’ve been looking forward to it so much.

“I just love playing rugby on the pitch and playing alongside my teammates. We played in the Land Rover Premiership Rugby Cup last year and it’s great because we get to play different clubs to normal.

“It would have meant loads to us to play at Twickenham. I was confident that we would do well because we have a great team. We’re really good at attacking but then our defensive line also comes up well.”

Henley did at least get the chance to rub shoulders with rugby’s elite, and Parton admitted he had been impressed with what he had seen, in particular stressing the importance of grassroots rugby.

“There has been so much talent on show and it’s good to see everyone having so much fun.

“There is such a good atmosphere and it was a great event all round.

“It’s so important to support grassroots rugby, we all started at this level and this is where you learn your trade.

“It’s where you get the experience and then you build up. It’s important to show your talent as well as make new friends, and that’s what rugby is all about.”