Bears devour Surrey Students to move top of the league 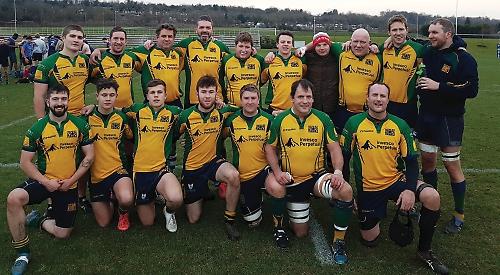 HENLEY Bears maintained their unbeaten run, and moved back to the top of the Thames Valley Invitation League as they feasted on the Surrey University side, coming away with an emphatic 64-12 win last Saturday.

This was a good performance against a side that were top of the league before the game, and especially given the eclectic age range of the Bears side, ranging from 18 to 49.

Having had significant trouble all week in getting enough bodies to travel to Guildford, the Bears were boosted by the appearance of colts scrum-half Jamie Winch, and Toby Venner, back earlier from university than expected.

The omens were perhaps not great when hooker Nick Smith lasted three seconds before limping off with a calf injury but nerves were soothed when Toby Venner sliced through virtually the whole Surrey side for his opening try. He was to cross a further three times during the game. The students hit back with a strong break from their talented centre and actually led for a few minutes before the Bears started to score at regular intervals to take the half-time score to 30-7, being six tries all unconverted. This included a try for colt Tom Purchase, who played well all game, especially with a dislocated finger for 60 minutes. By half-time the Bears had broken four of the opposition and the game had to resort to uncontested scrums, depriving the Henley side of one of their main weapons.

The second half continued in much the same vein as the first 40 minutes, with the Bears racking up another six tries and managing to convert the final two via drop kicks from Winch, who decided to dispense with the use of the kicking tee.

There were good performances by many players, but the powerful running and close quarter work from locks Tim Simmonds and Adrian Smith was particularly noticeable while Chris Fisher looked like a man re-born at tight-head prop. The more senior players got on the score sheet via Mark Venner and Simon Matthews. For those between colt and veteran status, Smith, Chris Annan, Murray Hughes and Jackson Lambert-Wilkes all featured while Toby Venner and Purchase flew the banner for the U20s.