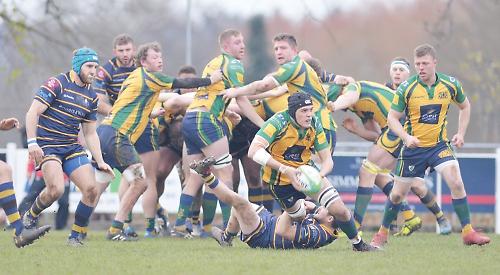 A BRACE of tries each for Tom Emery, David Hyde and Xavier Andre saw the Hawks power to a 43-28 win over Worthing Raiders at Dry Leas last Saturday.

Despite a scrappy first 10 minutes the game exploded into life when Emery crashed over for the Hawks following a good driving maul.

The game was all but over four minutes later when Hawks fullback Jack Robinson broke away to score a fine individual try and secure a bonus point for the home side. Worthing got on the scoresheet on the half hour mark with tighthead, Dan Sargent powering over from close range.

The second half started in a similar vein to the first until a Xavier Andre try, which looked very much like there was a forward pass in the build-up, put the Hawks further in front.

The away side came storming back with Raiders captain, Liam Perkins and then centre Jonathan Dawe going over in quick succession which brought the game back within 10 points. However, any hope of a Raiders comeback quickly evaporated when Worthing were reduced to 14 men and Tom Emery went over again in the corner.

The game wasn’t finished, another Andre try for the hosts was followed by a fourth try from fly-half, Matt McLean and a bonus point for the Raiders in injury time.

All in all, a convincing victory for the Hawks which has seen them really grow in confidence over the past month.