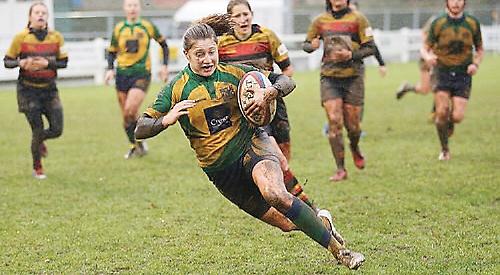 HENLEY Hawks Women progressed to the fourth round of the RFU Women’s Senior Cup thanks to a 12-10 home win against Richmond 2nds at Dry Leas last Sunday.

Richmond were quick off the mark with strong running lines from their centres that saw them break through before being halted by Gen Moody.

The Hawks went on a break with Dudding timing her pass perfectly to put Lizzie Hearn through for a one on one with the fullback, opting to chip but unfortunately the ball was charged down.

Richmond were now attacking but good solid defence again from Henley forced an error and the resulting scrum on the five metres saw Henley clearing the line.

Wheeler then stole the line out allowing Henley to attack as some strong runs from Collins, Matthews and Wysocki-Jones built a platform for the backs who shipped the ball wide to Williams and Copley linking up down the wing before being forced into touch.

The Hawks won the ball and played it to Wheeler who held the pass until the last minute before taking a hit which saw her leave the pitch.

The Henley scrum continued to dominate giving quick ball to Copley running strong down the wing who popped the ball to Moody to score the opening try after 30 minutes. The conversion was missed.

Richmond were quick to respond piling on the pressure from the restart but were too keen finding themselves giving away another penalty for offside. Kicking from territory and winning the lineout, the Hawks drove Richmond back as Wysocki-Jones broke from the back of the maul supported by Nash and Balmer. Richmond, determined to not let Henley through, were quick to the break down and won the ball back.

Kicking back and forth the Richmond winger was getting the ball in space but was stopped by Henley just short of the line as the hosts defended well.

Richmond equalised when, following end to end play, the ball was chipped over the Hawks defence with a visiting player winning the race to the line. The conversion was missed as the teams went into half-time at 5-5.

Henley restarted the second half and won the ball back straight away with Barrett making some crucial ground and building a good platform from Nash, Clarke and Thompson down the blind but into touch.

The Hawks has the majority of the possession in the second half but struggled to finish with Richmond constantly putting on pressure but giving away several penalties and as a result saw the referee go to his pocket and send a visiting player to the sin bin.

Henley, now with the extra player, built phases and Hearn made a break through the middle with players on the outside struggling to get the pass away managed to put the ball on her foot to Carr who couldn’t gather it. Henley were struggling to find a way through the Richmond strong defence but patiently worked the ball up the pitch drawing in players which allowed Dudding to call the ball out to Moody who went over for her second try. McFarland converted to put the Hawks Women 12-5 ahead.

With time running out Richmond put pressure on and scored their second try of the match which was not converted. With minutes left to play, and another knock on from the restart in the very muddy and wet conditions, Henley, with one final play again got the ball wide into some space but was tackled short from the line.

The Henley side will now travel to Wasps 2nds in the next round of the competition on January 7.