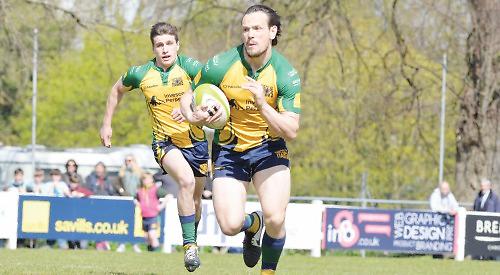 Despite the yawning gap in the league positions of the two clubs the Hawks approached this game bearing in mind they had been turned over 41-35 in the corresponding game towards the end of last season and the knowledge that the Hazelwood side had scored 441 points to date and were quite capable of pulling off a surprise result.

The Hawks dominated the game from the start and apart from a brief entry into the Hawks 22 immediately after kick-off the game was played in the Irish half.

Henley attacked continuously with the ball in hand with swift accurate well supported passing movements never putting the ball to boot. They were rewarded after nine minutes by an unconverted try after forward pressure enabled number eight Marcus Lowe to cross.

The Hawks continued to dominate and although they were slow to add to their score they were unlucky on two occasions not to be awarded scores when referee Louis Biggs appeared to be unsighted when he judged two touchdowns to be held up.

However, the continued pressure led to a touchdown by strong running Simon Perry after 22 minutes, the first of a brace. This was converted by George Jackson to bring the score to 12-0.

The Hawks’ continued dominance had its further reward when in similar fashion Perry again forced his way over in the 38th minute which, with a good conversion by scrum-half Jackson, made the score 19-0 at half-time.

On occasions this season the Hawks have been guilty of being slow out of the blocks after the break. They re-started this game without centre Liam O’Neill who had suffered a leg injury which resulted in him not taking further part in the match after 31 minutes and the visitors were further handicapped when new signing prop Kieran Ball was not able to continue after half-time having fractured a thumb.

Hawks’ supporters were now facing the prospect of a bad start to a second half as injuries mounted as top try scorer wing George Owen was quick to take advantage of the visitors’ misfortune when his side getting what had been a rarity, got worthwhile possession to race through a slightly disorganised defence to touch down a try converted by Alex Seers to reduce
the deficit to 5-19 after 43 minutes.

Worse was to follow for the Hawks when the hosts’ other leading try scorer, Reon Joseph, was put in possession to cross for Seers to convert and close the gap to 19-12 after 52 minutes.

The Hawks’ tactic was to stifle these runners by denying the home side as much possession as possible. This started to have an effect as the pack pressed forward and earned a penalty on the Irish 22 then with a line-out 20 metres from the home line they summoned the energy to put in their best driving maul of the game.

With the Geese in retreat they drove over the whitewash and the determined Tom Haynes drove through making the score 24-12 with 15 minutes to play.

The hosts pulled a try back when Peter Hodgkinson went over for an unconverted try on 74 minutes. A minute later the Hawks lost another player through injury when stalwart Jim Hadfield was also forced to leave the field. However the Hawks were now able to tie up the Wild Geese until the final whistle securing another five league points and fifth position in the league.