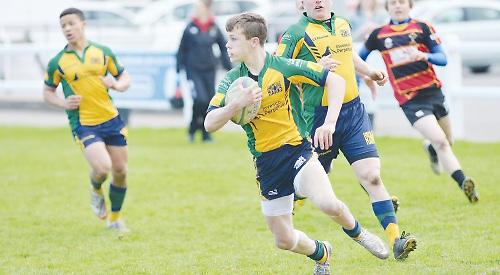 THE stiff breeze at Harpenden Road played its part in a tight encounter between the Romans and Bulls last Saturday which was eventually decided by a long wind-assisted penalty from just inside the Bulls half in the final seconds of the match.

Playing with the breeze in their favour the Bulls made use of sparse possession in the first half after succumbing to some early pressure and gifting the Romans a three point lead from in front of the posts. Toby Venner prodded some skilful grubber kicks to gain territory and following a well worked move down the left flank it was evergreen prop James Hadfield who collected a short off-load to crash over and restore the lead for the Bulls. Guy Rawsthorn who was on-form from the kicking tee added the extras.

The Romans strength was in their large pack and they utilised this well to regain a lead from several driving mauls eventually forcing a gap large enough to scramble over and grab a 10-7 advantage following the Bulls captain Ed Allen’s retirement from the action with a fractured ankle.

Rawsthorn used his support runners well to make a dent in the Romans defence from the restart and shortly before the break he added a penalty to regain parity on the scoreboard at 10-10.

As the teams turned around, with the wind now favouring the Romans, the Bulls had to shorten up their game and from a tight ruck five metres out Venner darted over for a typical scrum-half try. Rawsthorn again nudged over the two points but again from a restart the Bulls infringed and gifted an attacking platform for the Romans to catch up with their second try of the day to make it 17-17.

Dan Foley and Jimmy Wright made several worthwhile breaks through the Romans defence and eventually Hadfield was on hand to score wide on the right and give the Bulls a slim lead at 17-22 when Rawsthorn’s kick fell short of the target for the first time in the stiffening wind.

A penalty from the restart allowed the Romans to gain ground, 20-22, and with the momentum they sent their wide attack down the right flank catching the Bulls’ scramble defence flat-footed and slipped through to score a try with six minutes remaining.

Chasing a 25-22 deficit the Bulls were not to be outdone and after forcing a penalty through forward pressure they were awarded a kick to even the score from a wide angle. Despite Rawsthorn’s form he skewed the kick but in the scramble to clear their lines Matt Mann, the Bulls wing, was the quickest to react and dabbed down to restore a slender two point advantage with around three-and-a-half minutes remaining.

Unfortunately the Bulls could not hold on to possession long enough to see out the remainder of the game and infringed just inside their own half following a turn over at the ruck and with seconds remaining the Romans fly-half landed a hanging kick on the wind to take the four Zoo Shield points and leave the Bulls with two losing bonus points for their efforts.