Hawks Women stung by Wasps as they make cup exit 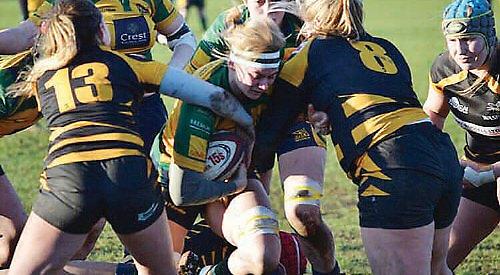 THE Henley Hawks Women’s side made an exit from this season’s Senior Cup after going down 38-5 at Wasps Ladies 2nds last Sunday.

Early pressure from Wasps saw the Hawks defending their line but good defence and a clearance kick allowed Hawks to gain possession in the Wasps half. A turnover ball at the half way line and strong running from Wasps found themselves camped on the Hawks line and they eventually found a way through to score a converted try to lead 7-0.

The Hawks had a good restart with a strong run from Moody to make ground to the 22 before the referee gave a penalty to Wasps and they regained territory to score their second try of the half after a turnover from the line-out to lead 12-0.

The restart saw some good tackling from the Hawks, resulting in a turnover ball. Some strong phases in the forwards and smart kick from Dudding resulted in a knock on from the Wasps fullback. The resultant scrum saw some confident running in the backs but the ball was lost in a ruck before the Hawks were penalised. The resultant penalty was kicked to touch and a clean line-out from Wasps got the ball out to their backs.

A tackle from Hearn stopped their attack and Wasps kicked for territory. The line-out was lost by the Hawks and the driving maul went to ground, with a scrum awarded to Wasps. A strong driving scrum from Wasps saw them score in the corner and convert. Just before half-time, Wasps were awarded a penalty which was kicked to touch. From the line-out Wasps scored with a rolling maul and converted to make it 26-0 at half-time. At the start of the second half, a penalty to Wasps and another good kick from their 10 allowed for a line-out two metres from the try line which resulted in a try being scored again from a driving maul that was not converted.

The Hawks upped their intensity from the restart and good pressure resulted in a scrum to Henley. The Hawks worked through some good phases which led to another penalty.

Quick reactions from Dudding saw her tap and go and make it over the whitewash before Wasps could react and their try was not converted.

The next 20 minutes saw some good defensive work from the Hawks, as well as some decent line breaks from Wheeler, Barratt and Solowin.

A turnover ball allowed Wasps’ number 10 to chip the ball over and the chase from their winger resulted in a try for Wasps which was converted.

The Hawks continued to work hard until the end and were awarded a scrum on the 10 metre line in which Davidson broke through before Wasps were awarded a penalty.