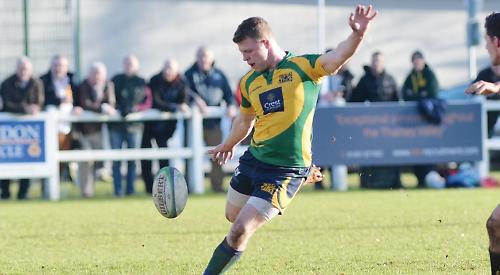 HENLEY HAWKS started the New Year with a tough fixture away to second placed Cinderford last Saturday. Back in September the Hawks had crashed to a 90-17 home defeat against the Forest of Dean side.

The game was played in icy damp conditions with a brisk north wind down the length of the pitch. The Hawks had the advantage of this at kick-off but late changes in the front row meant they needed to take the most of this against a big physical pack.

The Hawks had territorial advantage for much of the first 40 minutes as their forwards aggressively kept Cinderford on the back foot. They were under pressure as indicated by the award of four penalties against them in the first 15 minutes. The Hawks took an early lead after just two minutes with a penalty from 30 metres from in front of the posts converted by scrum-half George Jackson.

When the Foresters obtained possession the Hawks defence was firm and resilient but was turned over by handling errors which gave the opportunity for wings Alex Frame and Rueben Norville to use their pace to score a try each. Neither of these were converted as the home side led 10-3 after 26 minutes.

The Hawks were not able to create scoring opportunities apart from the pressure which resulted in the award of another penalty in a similar position to the one which had given them the early lead. Jackson again was cool in the execution of the resultant kick which made the score 10-6 in favour of Cinderford at half-time.

The second half gave the hosts the advantage of the following wind which had strengthened to such a degree that any Hawks clearance kicks made little progress and at time threatened to land behind them. The Hawks were also disadvantaged having lost the experience loose head prop Bradley Cook after 18 minutes.

Cinderford, with the wind advantage, now began to exploit their dominance in the set scrums with the Hawks having to struggle to heel the ball on their own put-in. Nevertheless the game turned against them decisively when Kieran Ball, replacement for Cook, was given a yellow card as the Hawks had repeatedly transgressed in the set scrums. Prior to this replacement prop Tim Brockett had added to the Foresters’ lead with an unconverted try.

The effect on a tiring Hawks team took the odds clearly against them especially when there were uncontested scrums for 10 minutes whilst the yellow card was in force. The result was that they conceded tries by flanker Aaron Ryan (68 minutes), Frame (76) and fly-half Liam Hemming (78), the latter two converted by Hemming making the final score 34-6.

Given the adversities suffered by the Hawks in the game, and the late rush of tries, although they were not happy in defeat there was certainly some merit in their performance against a side, because of other results, that are now top of the league.