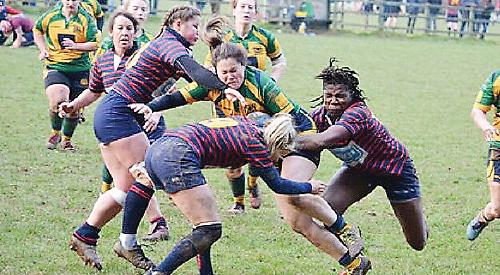 HENLEY Hawks Women suffered a 12-0 defeat away to Southampton side Trojans last Sunday.

The home side hit the ground running, immediately putting pressure on Henley from the kick-off as the visitors were pushed back to their own 22 having to defend wave after wave of Trojan attack.

Henley stayed strong holding the line before a quick turnover gave enough time for a kick for territory. Trojans used a solid scrum base to see their fullback blast through Henley’s defence until she was stopped by a strong tackle by fullback Thompson. The pressure remained as quick hands from Trojans saw them run in a try under the posts. The conversion was successful.

Trojans implemented successful kicks for territory putting the Henley back three under pressure. Poor discipline allowed Trojans to feel confident and continue running strong lines forcing Henley on to the back foot. Two more penalties in a row allowed Trojans to work the ball wide and score again. The try was not converted.

Henley rallied and good turnovers from Balmer led to the visitors pushing the home team into their own 22 with quick hands through the backs. Hard lines came thick and fast from both Solowin and Williamson on the wing.

Trojans were now on the back foot and mounting pressure caused the home side to give away penalties. Henley sent in wave after wave of attack from the forwards as the half-time whistle blows on a knock on.

The second half saw Henley crank up the pressure on Trojans and good line speed forced knock ons. With growing confidence Henley built phases, slowly grinding away at the Trojan defences.

Good organisation and quick hands saw the ball get out wide to the back again but poor execution saw a knock on. Trojans hit back hard, eventually kicking the ball for territory and once again putting Henley’s back three under pressure.

After working hard to get back up the pitch, nerves saw Henley once again knock on. Penalties were flying back and forth between the two sides disturbing fluid play and resulting in Solowin being substituted for Humphreys due to injury.

The match settled into routine of a Henley side building solid phases up the pitch before falling at the final hurdle with Trojans using their hard kicking fly-half to force the attack to build again from the visitors’ 22. The bench had good impact with Simpson and Davies carrying well in close contact and Copley running hard lines.

The final 10 minutes saw Henley set up camp on the Trojans goal line and throw everything at the home team but it wasn’t to be enough, and a final knock on left the score at 12-0.