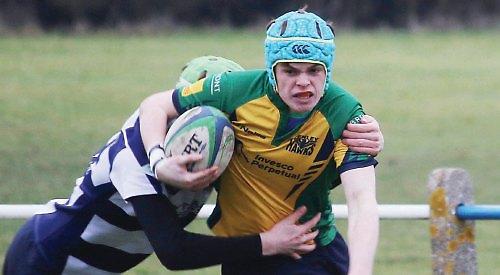 HENLEY Hawks Colts played enterprising rugby to record a convincing 47-7 victory in their league match at Leighton Buzzard on Sunday.

There were some memorable tries from Henley, the first coming after fly-half, Jamie Winch, looped round his centre and off-loaded a long pass to wing, Cameron Sommerville-Bailey, who crossed in the corner.

From the ensuing kick-off, Henley gathered and went blind with flank, Ben Stacey, breaking free and outpacing Leighton Buzzard’s cover defence to score under the posts.

Minutes later, Henley advanced deep into their opponents’ half of the field where Rhys Edwards wrong-footed the defence to score his side’s third try.

A fourth Henley try came on the stroke of half-time after Tom Grenfell won a tight-head and the ball moved quickly through the hands to right wing, Matt Dalrymple, who crossed unopposed.

Winch converted all four first-half tries to enable Henley to establish a commanding 28-0 lead at the interval.

As soon as play resumed, Henley pressured Leighton Buzzard into making a series of errors that led to the ball being secured and Will Thomsett crashing over for a try.

Soon afterwards, when Rhys Edwards sliced through the Buzzards’ defence and ran some 40 metres to score, there was a danger that the floodgates would open as Henley had built a 42-0 lead midway through the second half.

Elusive running from the Henley backs, with Tom Purchase conspicuous, was well supported by hard driving forward play where Sam Williams, Ed Houghton and Benedict Madzar caught the eye, whilst Ben Venner’s breaks at scrum-half made him more than a handful.

The home side never gave up and after a period of sustained attacking play, they took advantage of a quickly-taken penalty to create an overlap and score a try that was converted.

Henley had the last say and were able to emphasise their superiority when an intercept, followed by some strong running from captain, Morgan Zolkwer, led to Sommerville-Bailey’s second try.