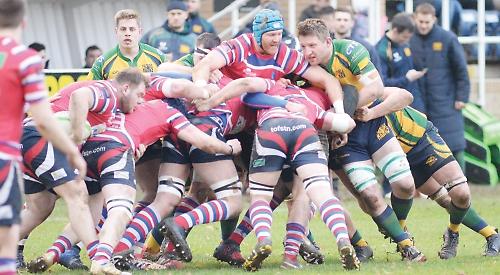 AFTER a fitting memorial to Henley club player Simon Priestley, it was an emotionally charged Dry Leas on Saturday that witnessed a committed and evenly fought contest but the Henley Hawks couldn’t quite find a winning performance with the visiting Kent side securing victory with a try in the final few minutes.

The unforced errors that plagued the Hawks early on in the season started to reappear as they were desperate to produce a good display for the large crowd. A draw was looking the most likely and deserved result for both teams but the visitors were well organised and used the ball intelligently to force the victory. The Hawks line-out, so often used an attacking threat, was not as accurate as it has been and they lost throws at crucial moments.

The opening exchanges were fast with the Hawks trying to play at pace getting the ball wide against a well organised Tonbridge defence. Dave Clements and Dave Hyde led the charges for the Hawks while the visitors were more prepared to kick for position.

Henley’s start was rewarded when George Jackson kicked an early penalty but they then put themselves under pressure immediately by trying to run the kick-off out of their own 22. Possession was lost in the process which enabled Tonbridge wing Fin Coxon-Smith to break clear and score in the corner. Outside half Nathan Holmes converted. Tonbridge were disciplined with the ball and began to gain the upper hand. They came close to scoring a couple of times soon afterwards but Hawks wing Sam Portland was on hand to save the day on both occasions.

The visitors’ second try soon followed and after working their way into Hawks territory, Rory McHugh broke clear from a maul and scampered 20 metres to score and extend the Tonbridge lead.

The Hawks responded just before the break when Jackson broke down the blind side and some good interplay involving George Primett, Dave Hyde and Emery very nearly created a try. This finished the first half proceedings with the visitors 12-3 ahead.

Henley enjoyed their best spell after the break, keeping possession with Hyde and Matt Tibbatts prominent. They enjoyed a period of good possession and worked their way into the Juddians territory. From a driving maul, Henley prop Primett broke clear to score which Jackson converted.

Further pressure from the Hawks brought a second try soon afterwards. Tibbatts capped a good performance to force his way over to score and put Henley in front. The Hawks effort cannot be faulted as they continued to look for a further score to seal the game. However despite going close, crucial handling errors gave the visitors the extra momentum they needed. The Tonbridge forwards began to get back into the game and reverted to their pick and go tactics putting the Hawks on the back foot.

With the home line-out still struggling to provide any sort of platform, the visitors stole another home throw-in and worked themselves into a position for Holmes to level the scores with a penalty. At 15-15, the draw looked likely but the resilient Kent side had other ideas and scored the winning try three minutes from the end when Reece Conlon crashed over.

The Hawks still had time to save the game and another good break from Jackson put the Hawks into a good position. After a series of attacks, the ball was lost in midfield and Tonbridge were able to clear and claim victory.