Cheltenham have no answer to Hawks 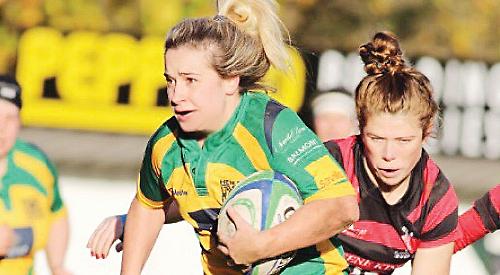 The Hawks started strongly with precise running lines from Wheeler and Hearn with hard tackles being made by Cheltenham. A knock on from the Hawks resulted in a Cheltenham scrum with their runners being halted by Matthews and Ashman.

After the clock was stopped for injuries for both teams the Hawks won a scrum, under Dudding’s command, as the hosts continued to make ground.

A Cheltenham line-out resulted in a maul which Henley did not engage with which ended in a Hawks scrum where good hooking from Simpson allowed the hosts to use the strong forwards and gain ground inch by inch.

A quick turnover saw Cheltenham use their strong backs and run the ball in using quick lines but quick tackles from Solowin stopped them in their tracks.

Cheltenham continued to utilise their backs and put the Hawks under pressure by kicking in Hearn’s direction, a task which she took in her stride and set the ball perfectly for the forwards to continue gaining ground.

A quick turnover in the ruck saw the Hawks defend but after a forward pass, Cheltenham took the ball over the try line but the score was disallowed by the referee as the half ended scoreless.

In the second half the Hawks continued to show drive with Humphries, who had come on a substitute for Williams, making a big impact on the wing, running clear lines and setting the ball up safely.

On 52 minutes a Hawks line-out saw the ball passed into Dudding’s reliable hands and through the backs to Hearn who took on the opposition and secured a try which she converted to put the hosts 7-0 up.

On 55 minutes the Hawks made another substitution, Dudding making way for Burger while five minutes later Thompson went off for Wilkie.

A Cheltenham line-out put the Hawks back in defence but good tackles from Wysocki-Jones and Balmer kept the visitors at bay. On 65 minutes the hosts made a double substitution with Collins and Ashman making way for Timmins and Davies.

Cheltenham then forced the Hawks to defend their line but strong tackles from Davies and Wilkie continued to keep the visitors on the back foot.

On 69 minutes a Cheltenham player received a yellow card after Balmer was struck in a ruck. A winning Henley scrum allowed the backs to gain ground by Craig, Burger and Solowin carrying strongly.

A penalty against Cheltenham allowed the Hawks to make the quick decision to get the ball to Hearn who showed her ability to kick the ball out of the field, ending the game on a high for the Hawks.