Young Bulls side are outgunned by Ravens 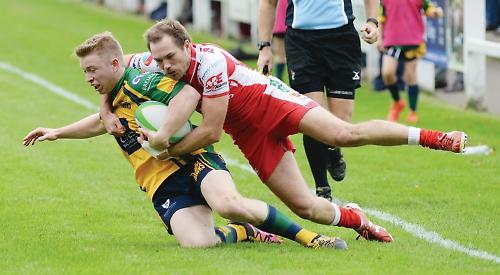 HENLEY BULLS continued their struggle for a win in the Zoo Shield in difficult conditions at Dry Leas where the Ravens’ defence became a huge factor in them returning to Colchester with a winning bonus point.

Home debuts for 17-year-olds Henley College duo Leo Webb and Harry Salisbury and Shiplake College flanker Ollie Brown provided a glimmer of hope for the future of this young Bulls outfit who included just two players over 25 years of age who, at times throughout the game, provided some of the more expansive and exciting rugby.

The visitors took the lead with one of their driving mauls that throughout the game the Bulls found difficult to stem and with a hugely dominant scrummage their weight advantage was put to good use throughout.

The Ravens’ second score came as a result of one such dominant scrum following a turnover of the Bulls attack. And with the extra two points they led comfortably after 20 minutes until the Bulls gained a penalty and from the line-out number eight Ross Gilbert steered the pack over to keep them in the game at 5-12.

The Bulls enjoyed their most successful period of play in the remaining 10 minutes of the first half creating some good continuity through Webb and his forwards carrying hard into the Ravens red zone and then throwing several slick passes to Sam Quelch who went over wide on the right to put the Bulls within touching distance at 10-12.

Just prior to the break the Ravens number eight regained the restart at the base of a ruck and ran almost unchallenged through some weak Bulls defence to give them a clear lead at the break at 10-17.

In the second half both sides scored a try each. The Bulls back line created more problems for the Ravens sending Will Janes over from close range on a hard angle between the posts which gave the hosts something to fight for but solid defence and a further penalty try awarded under the posts for dangerous tackling gave the Ravens the clearance they needed to return to Essex victors.