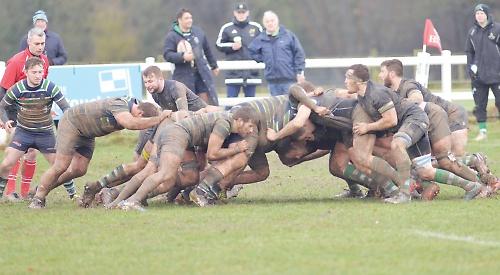 ABBEY went down to a gallant defeat against a strong Buckingham side last Saturday.

The visitors, with outside half Max Nagy in outstanding form, dominated the first half and built up a 19-0 lead, but the home pack responded well after the break and had territorial advantage for long periods. However, the visitors’ defence was as impressive as their attack, and for all their efforts Abbey’s only reward was a single converted try.

A heavy surface and persistent rain suggested that this would be a forward-orientated encounter, but both sides tried to move the ball in the early stages.

Abbey held their own at the opening scrum, and when they were driven backwards at the second set piece skipper Will Woodward protected the ball well. Outside half Luke Burns twice kicked well out of defence, and second row Jeremy Knights won good possession at the front of the first line-out.

A dodging run from centre Ben Mitchell took Abbey as far as the Buckingham 22, but after Burns and Knights had launched promising drives, a penalty was conceded.

Nagy then received the ball and set off on a mazy 30 metre run. He passed right to Craig Coxon, and the visitors’ winger broke clear up the touchline and cut inside to touch down for a try. Nagy converted to put his side 7-0 up after 11 minutes.

Buckingham increased their lead with a reversal of roles, Coxon began the move and Nagy finished it. The outside half took his winger’s pass and glided through with deceptive pace to touch down under the sticks. He added the subsequent conversion to double his side’s lead.

The second quarter began with Abbey forced to defend once again, and they conceded a penalty close to the halfway line. The ensuing kick set up a good position for Buckingham inside the 22, and the pack drove to the line to cross for the third try. Flanker Will Cooper got the ball down, but Nagy saw his conversion attempt bounce wide off the left post.

After this, Abbey kept possession for a lengthy period with Ross and flanker Mike Beckly both initiating good moves. Lambert-Taylor and Burns both kicked well for territory, and after a break up the middle of the field by Mitchell and good support from fullback Jules Greenaway, flanker George House was stopped five metres from the line.

Shortly after Abbey were penalised inside their own half and Nagy attempted a long-range kick at goal. His effort dropped well wide of the target and Mitchell and hooker Mark Toland worked the ball clear. Another promising bout of Abbey handling followed, prompted by a high kick from Lambert-Taylor.

Another penalty was conceded as the half ended with Buckingham leading 19-0.

Abbey swapped George House for his brother Ed at the start of the second half, and they were soon in the visitors’ 22.

Winger Diego de Marcilla Bahlsen put Woodward clear for a 30 metre run, after which Mitchell, King, Shaw and Postlethwaite linked well. Burns and Knights continued the attack, and when Buckingham were penalised Lambert-Taylor kicked for the corner. Frustratingly, Abbey lost the line-out.

Shaw stole a Buckingham throw and Woodward, King, Lambert-Taylor and Knights launched the next phase of attacking. Mitchell, Ross, Postlethwaite and Beckly all handled as Abbey battered away inside the 22. Beckly and Shaw were stopped short of the line, and then both Woodward and Toland got close. Then it seemed that Shaw must get over, but he got the ball to the ground agonisingly short of the line.

Buckingham were penalised for persistent offside, and number eight Phil Wright was yellow-carded. With their tails up, the Abbey pack elected to take a scrum from the penalty, and a huge drive saw Woodward plunge over for a try. De Marcilla Bahlsen added the conversion.

Beckly, Burns and Lambert-Taylor soon put Abbey on the attack again, but after Knights and Mitchell made ground in the 22 the ball was lost. The Buckingham defence refused to buckle as Woodward drove for the line and following a tap penalty, Ross, Knights, Burns and Toland kept Buckingham under pressure with good runs. Soon afterwards the visitors were restored to a full side with the return of Wright.

Toland was injured shortly afterwards, Ollie Charlton replacing him in the front row with Postlethwaite moving to hooker.

De Marcilla Bahlsen and Mitchell both had promising runs, before Mitchell made a further 20 metres. Abbey would not give up in their search for a second try, with Knights and King going close, but once more the visitors’ defence was equal to anything thrown at it.

As the game entered injury time, Shackleford and Mitchell both made good ground. King took a nasty knock and Waring returned in his place, and after this, almost for the first time in the second half, Buckingham established a good position in the home 22. Abbey conceded a penalty, and from the ensuing line-out Wright dived over for a bonus point try. Nagy converted and the final whistle sounded straight afterwards.