Hawks on the up following six try hammering of Broadstreet 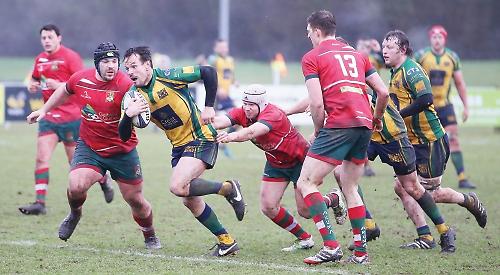 HENLEY HAWKS, in their first ever game against newly promoted Broadstreet, faced a game of a soggy prospect given a morning of steady rain followed by a snow shower which greeted the
players at kick-off last Saturday.

Given the conditions, handling errors by both teams were few and far between and remarkably referee James Clarke did not find it necessary to halt the game to whistle for a set scrum in the first 40 minutes.

The Hawks settled into the game the better and their forwards were able to force their way over from a forward drive in the first six minutes with number eight Matthew Tibbatts securing the first of a hat-trick of tries in the match.

The Hawks continued to press their attacks and added a second try when number six David Hyde used his height and weight to score after just 12 minutes. Scrum half George Jackson, who was in excellent goal-kicking form, converted both of these tries, and was successful with four further attempts in the second half, to give the Hawks a 14 point lead.

As is their wont they relaxed after securing a comfortable lead early in the game and some hesitation in defence led them to allow Broadstreet to score two tries to make the score 14-12 through Dan
Glasse and scrum half Thatcher.

At the start of the second half the hosts nearly put Broadstreet on the front foot when a mis-directed pass by fly-half Joe Butler was intercepted by home centre and first half scorer Glasse who seized it with half the pitch undefended. He was, however, chased hard and with success by Hawks’ Alan Awcock who tackled him 15 metres from the line.

This could be said to be a turning point in the game but from then on the Hawks, with good possession from line-outs, rediscovered powerful driving mauling which has been absent from their armour in recent games and they established a dominance with which the home pack could not deal with. The Hawks adopted a game plan which hinged on an excellent kicking display by Joe Butler who ensured that Broadstreet were penned in their own territory. The Hawks were now able to use their driving mauling game backed by line-out superiority to create a series of scoring opportunities which led to a further two tries by Tibbatts in the 56th and 65th minutes and George Primett, an aggressive mauling prop, and replacement flanker Scott White, following chip wide in the dead ball area.

These tries were all converted by Jackson to bring his match aggregate to 12 points and the Hawks winning margin to 42-12.