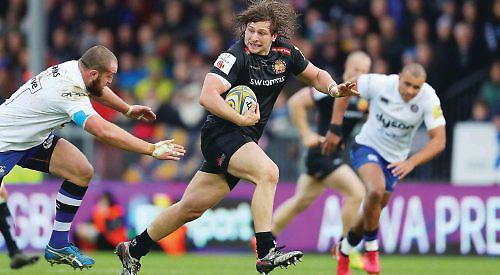 A FORMER Henley College student and AASE graduate has been named in Eddie Jones’s England squad for their opening Six Nations match against Italy on February 4.

Loosehead prop Alec Hepburn, who now plays his rugby for reigning Premiership champions Exeter Chiefs, is one of eight uncapped players named for the match in Rome’s Stadio Olimpico.

Hepburn, a former Gillotts School pupil who used to live in Damer Gardens, came through The Henley College’s Achieving Academic and Sporting Excellence programme before signing for Wasps.

The Australian-born 24-year-old played for Perth Spirit in his home country before signing for Exeter Chiefs in 2015 where he has gone on to make 44 top-flight appearances.

Hepburn, who only took up the sport at the age of 15 while at school at Gillotts, has also represented England Saxtons and England U20s.

Henley College teacher and rugby manager Martin Unsworth was not surprised by his former pupil being selected. Unsworth said: “Alec and I go back a long way when I first started coaching him at The Henley College. I used to drive him to training camps and recall watching him playing for England U18s and predicting then that he would play for England. I have been avidly following him ever since, from playing with the England U20s to watching this lovely lad play for Henley, London Welsh and Exeter.

“Alec had two very big injuries but at the age of 24 was always on the radar to move up from his England Saxons cap earned in South Africa. Alec has truly earned this selection as one of the real prospects of the Premiership.”