Nuns captain confident side can challenge for title following setback 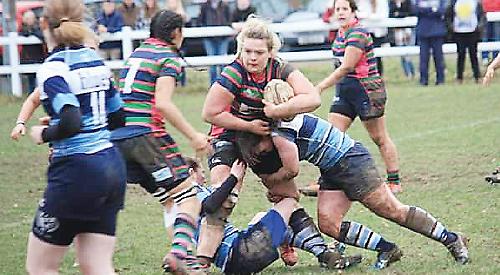 THE captain of Abbey Nuns insists there is still time to right past wrongs after her side missed the chance to overtake Newbury at the top of Championship SW 2, writes Fiona Tomas.

The Nuns suffered a 26-12 defeat last Sunday in an intense local derby at Rosehill, despite scoring a last-gasp try through Gwen Cartwright, which could prove vital come the end of the season.

But their discipline cost them as they struggled to break down an organised Newbury outfit who produced a rampant second-half showing.

The result sees Abbey slip to third in the table, but with a game in hand, skipper Joey Fowler remained defiant and praised her side’s tremendous work-rate ahead of an away fixture with Wimbledon this weekend.

Lock Fowler said: “The match was a real dog-fight, but Newbury blew us out of the water in the second half.

“The girls put a big shift and I’m really proud of them. We knew it was going to be a tough game — it always is against Newbury – but there’s still a long way to go this season.” It was an energetic start from Abbey, whose strong set-pieces and forward build-up play put the visitors on the back foot before grabbing the first points in a fiercely contested first half. Impressive carries from Jess Potter, Fowler and Abi Wall helped Abbey advance into the Blues’ territory after a quarter of an hour, before hooker Claire Stevens crashed over after several phases, with Annabel Hawkins squeezing the conversion through. But in a game interrupted by knock-ons in greasy conditions, Newbury’s Jemma Thripp pounced on a loose ball in Abbey’s half to dive in the corner, with Chloe Hunt adding her first of three conversions.

The Nuns spearheaded a forward game plan which saw Holly King drive tirelessly at Newbury’s defence, bearing the brunt of some huge hits.

But Jack Reynolds’s side struggled to adopt their usual expansive, fluid rugby out wide, despite scrum-half Ellie Rice combining well with Hawkins, who matched Newbury’s kicking territory for much of the game.

There were just two points between the sides at half-time, but it was Newbury who took the initiative after the break, undeterred by missing an earlier chance to go ahead through a penalty conversion.

When Abbey’s Meaghan Fowler saw yellow, the Blues capitalised as Lizzie Harris streaked through to score, before a fine solo effort from Lauren Hasset and a Mason interception all but condemned Abbey to a second successive defeat to their Berkshire foes.

But Abbey fought until the end and enjoyed the final word when substitute Cartwright powered over in the corner for her debut try in a Nuns shirt.