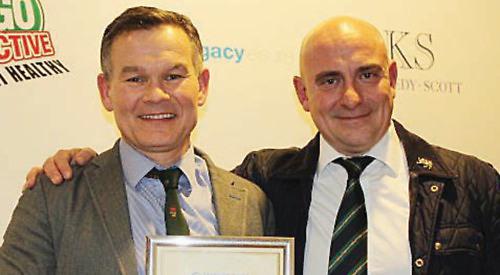 HENLEY Hawks’ mini and junior section were named runners-up in the sports development project category at the Oxfordshire Sports Awards of the Year competition held in Oxford last month.

This season, the club’s minis and juniors section, led by Dax Aiken, chairman of the minis and juniors, undertook a new initiative called Player Reach Out Program (PROP) to make rugby accessible to all.

The scheme, which has been delivered by local sports coaches, was delivered to six primary schools in the area, namely Shiplake, Badgemore, Trinity, Valley Road, Sacred Heart and Nettlebed and also for years seven at eight at Gillotts secondary school.

PROP has now delivered rugby coaching to more than 400 children per week and culminated in festivals for the years one and two children.

The role of the program has been to develop skills, confidence building and game understanding but also to make the club more accessible to young people in the area and to create a stronger link between local schools and parents putting Henley Hawks RFC at the centre of the local community and providing a safe and welcome environment for children of all ages and abilities.

The success of the program has led to more primary and secondary schools wishing to participate and ultimately our objective is to extend this scheme further in the years to come.