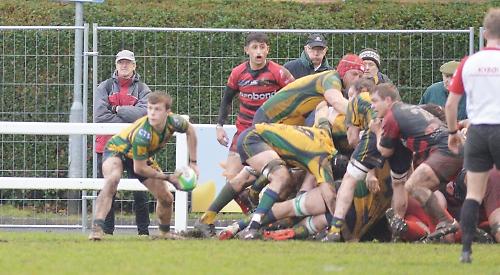 A PENALTY try two minutes from the end gave the Henley Hawks a bonus point win against a committed and well organised Old Redcliffians side at Dry Leas on Saturday.

With heavy rain before the game, and persistent drizzle throughout, conditions were heavy but both sides contributed to an entertaining game.

The visitors, who were much better than their league position suggests, matched the Hawks, especially in the first period but it was the hosts who started to dominate territory and possession in the second half and despite a number of handling errors, managed to force a victory and move themselves up to fifth place in the league table.

The scoreboard was put to good use early on as the Hawks, as they seem to do every week, started brightly and went in front after just two minutes when skipper Jake Albon crashed over for the home side’s opening try.

The visitors responded immediately with a penalty from outside half Ashley Groves.

Playing expansive rugby in wet conditions is not always easy but the Hawks were prepared to try and went close through Xavier Andre after some good work from Dave Hyde. The Hawks pressure led to an attacking scrum and after a series of drives, Henley extended their lead three minutes later with a try from the ever dependable Tommy Haynes.

Back came the Bristol outfit who levelled the scores. The Hawks lost possession trying to run out of their own half and the Reds showed some good handling between forwards and backs allowing scrum half Kayan Wiltshire to score a try which Groves converted to level the scores at 10-10. The Reds looked comfortable with ball in hand and made a number of breaks particularly through centre Jermaine Jones. For the Hawks, skipper Albon led from the front and there were some good drives from Dave Hyde and Marcus Lowe, well supported by Tommy Haynes.

The Hawks did miss a couple of scoring opportunities. A good break from Joe Butler set up a good position for the home side but after a crash ball move, the Hawks were penalised for holding on. The line-out also struggled at times but the intent from the Hawks was good despite lacking a cutting edge.

After a number of even exchanges, and with the half coming to a close, the visitors struck twice to take the initiative into the break. A Groves penalty put the Reds in front before they extended that lead further with a good try from winger Henry Bird who out-jumped the Henley defence to gather a cross field kick and then avoid the rest of the Henley cover and score. Groves converted the try to give the visitors a 20-10 lead at the interval.

The second half belonged mainly to the Hawks. They dominated territory and possession and showed a good attacking intent.

The visitors, although comfortable with their own game plan, rarely threatened in the second half and were not to score again as the Hawks pushed to get back in the game. Henley had plenty of possession but unforced errors, a lack of creativity and a well organised defence from the Reds frustrated the Hawks’ attacking play. A good line-out drive led by Haynes was thwarted when the Hawks gave away a penalty right on the the Reds line. Another good Hawks move put Connor Hayhow clear but they were stopped by the referee who deemed crossing had taken place.

Just as it looked as though it would not be Henley’s day, a magnificent individual try from Alan Awcock changed the complexion of the match. He fielded a Reds clearance kick in his own half and then ran strongly for 50m, brushing off a number of tackles before chipping ahead. In the resulting melee for the ball, Awcock pounced to score an excellent try for the Hawks.

This gave Henley the lift they needed and they continued to attack with scrum half Toby Venner sniping well on his debut as well as getting the ball out quickly to the backs. With the Hawks looking ever more dominant, and with the match coming to a close, Henley were awarded a penalty try as the visitors tried illegally to bring down the home side’s driving maul.

Now with a two point lead, there was very little time left for the visitors to respond and the Hawks got the victory they were looking for.