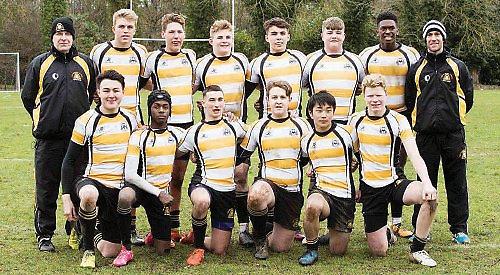 THE Oratory U16 A team captain Morgan Macrae lifted the winners’ trophy at the Gordon’s School sevens competition in Woking last Sunday.

The Oratory started the day inauspiciously, going down 19-0 in the first half against Gordon’s U16A team. The Oratory A rallied back to 19-19, but couldn’t hold out and lost narrowly 24-19.

Oratory A played another four games just to get out of the group stage, where their quality of rugby combined with physicality and mental toughness came to the fore, as they dispatched the remaining teams in the group — St John’s Leatherhead 29-10, Worth School 36-0, Royal Alexandra and Albert School 40-7 and St Columba’s College 56-0.

Gordon’s A team had also lost a group match as Oratory ended up tied on group points but it was the Woodcote-based side that went through as group winners with their superior points difference.

In the semi-final against Wimbledon College the Oratory started slowly but thier power and growing confidence saw them stretch away to win 40-17.

The final against City of London Freeman’s School went right to the wire. A few players had taken knocks and were no longer able to play, so the final featured 10 players in their seventh game of the day.

There followed a tense minute waiting for their kicker to take the drop-kick conversion, which went wide, leaving the Oratory 19-17 up.

The referee caused further anxiety and nervousness by saying they had time to kick off again. As it turned out, the kicker was exhausted and the ball went off the field of play to end the game.

Max Nugent, Toby Winterbottom and William Cassar all worked tirelessly while Olly Monye was named player of the tournament for the Oratory.