Errors prove costly as side slip to suprise away defeat 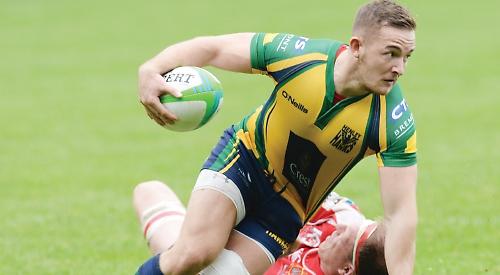 HENLEY HAWKS made the four-hour trek to north Devon confident that they could sustain their fifth place in the league after the previous week’s dramatic win.

The late withdrawal of influential skipper Jake Albon meant a quick reshuffle to the pack with David Hyde moving into the second row and Scott White filling the vacant flanker role. In addition Toby Venner was drafted on to the subs bench after an impressive debut last week.

The game was played on a heavy pitch and consequently the play involved numerous errors from both sides as they struggled to come to terms with the conditions. However the promised incessant rain did not materialise and the game was played largely in the dry but with a strong wind blowing across the pitch.

The game started at a furious pace with the Hawks line showing aggression and speed to nullify any attacks from the promising Barnstaple midfield. However, it was the hosts who were first on the score sheet after some strong running from the fullback breached the defence to allow the supporting centre Will Topps to score close to the posts. This led to an easy conversion and a 7-0 lead.

This seemed to spur Henley into action as both Hyde and Cook made significant line breaks and scores looked inevitable only for the attack to fizzle out with lack of meaningful support. In addition Jackson was finding holes around the fringes and made a searing break of 40 metres from a tap and go penalty. The opposition scrambled clear but with a resulting 10 metre line-out it looked as if Henley might break the ice. However, the hosts were in no mood to surrender their lead and the threat was cleared as they turned over the ball. This was the story of the first half as two or three good chances went begging.

With a slight lead at half-time it was clear whoever scored first would be vital and the visitors struck after 10 minutes when pressure on the Barnstaple line produced an opening for Butler to touch down under the posts with Jackson securing the extras.

Henley should now have really pushed forward their advantage and take the game to their dogged opponents. They had plenty of possession but vital mistakes at crucial moments coupled with a determined home side defence made sure chances were few and far between.

One such mistake produced a relatively straightforward penalty chance which was to prove costly to take the score to 10-7 in the visitors’ favour.

Despite some determined attacks on the Barnstaple line in the dying minutes Henley could not find their way through and a turnover five metres out signalled the end of a disappointing afternoon.