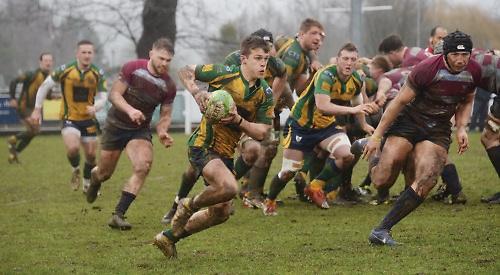 WIMBLEDON edged closer to safety with a richly deserved victory over a surprisingly lacklustre Henley Hawks side at a rain-sodden Dry Leas on Saturday afternoon.

Going into the match Wimbledon sat at the foot of National Division 2 South having won just four matches all season while the Hawks were sixth having lost out at Barnstaple the previous week.

Following a cagey opening quarter, the visitors deservedly took the lead on 15 minutes with fullback Matt Gilbert going over after sustained pressure from the away side.

The second half started in a similar vein to the first. With Brad Cook off injured with a head injury, the Hawks had to play the rest of the game with 14 men having had to resort to uncontested scrums in the process.

Wimbledon went further ahead in the 60th minute with Ben Brooks crashing over in the corner. Despite suffering their second successive defeat the Hawks, who failed to get on the scoreboard for the first time this season, remain in sixth in the table whilst Wimbledon moved up one spot.

Speaking after the defeat, Henley’s director of rugby Nigel Dudding said his side would learn from underestimating their opponents. He said: “It was a desperately disappointing display against an improving side who have gained some significant wins in recent weeks. I guess we learnt never to underestimate a side battling for their league survival.

“We have a long injury list developing which hasn’t helped continuity. Due to front row injuries we had to play almost half of this game with 14 men.

“However we still retain sixth spot and with a week off in a couple of weeks we will be looking to regroup and finish the season on a high.”