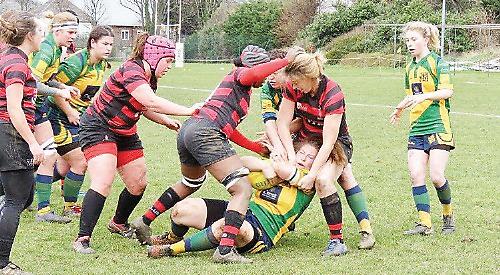 HENLEY Hawks Women triumphed in their last away game of the season at Blackheath on Sunday.

The Hawks won the toss and opted to receive the kick-off. Trying to build out of their half the Hawks attack looked panicked and not providing clear ball to play with while the Blackheath defence were quick and applying the pressure for the visitors to make mistakes.

Wheeler was back to stealing line-out balls for fun and giving the Hawks a platform to play with. There were strong running lines from Wilkie and Williams on the wings but they could not find a way through the opposition defence.

The possession continued to exchange while Collins and Nash were leading the way with good work rate and big hits.

Wysocki-Jones was hitting the back of the line-out perfectly allowing the backs to have quick ball. Again Wilkie was joining the line with pace and making good ground as the first half ended 0-0.

After the re-start the Hawks stole the ball and Collins made a half break. Davidson recycled the ball quickly allowing Dudding to slot the ball into the bottom corner and with Williams chasing she applied the pressure and the Blackheath winger panicked and kicked it out five metres from the try line.

The Hawks secured the line-out but the maul was stopped short of the whitewash. A switch in play saw fullback Thompson run hard, nearly making it over the line, but Blackheath did not release and the Hawks went for the line-out again. A repeat performance in the set play led to the referee going between the posts for a penalty try to the Hawks.

The game plan was to now continue to turn the opposition and ensure play remained in their half. Dudding was controlling the game with her boot and sending the ball into space again into the corner where the Blackheath winger regained the ball but was smashed into touch by Williams and Copley. There was a sense of déjà vu for the Hawks as they set up for a catch and drive for Krabbé to peel off and score her debut try for visitors to put them 12-0 up.

The reliable Wysocki-Jones was carrying well along with Barrett and Matthews while Wheeler and Craig were also making effective half breaks.

Blackheath came back fighting and were testing the Hawks defence and discipline was letting the visitors down as they began to give away penalties. The opposition scrum half put in a chip over the top and they managed to regain possession with quick hands down the back line where their fullback crossed the line to reduce the deficit to 5-12.

The Hawks had to compose themselves and ensure they could finish the game without letting in any more points. Substitutions had been made, including Kingman returning to the pitch after a shoulder injury put her out last season.

A final push from Blackheath attacking into the Hawks 22 saw them shift the ball down the hands creating an overlap only for their winger to fumble the ball from the final pass. The knock-on ended the game and the Hawks were relieved not to have conceded a soft try.

Players’ player went to Wilkie for her hard running lines and coaches’ player to Thompson for her positioning and strong defence.

Henley Hawks Women are back in action this Sunday when they entertain Waterloo Ladies in the cup.