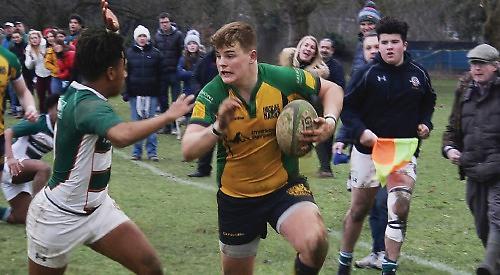 HENLEY Hawks Colts staged a thrilling comeback before going down narrowly 24-29 to Ealing in a friendly encounter at Dry Leas on Sunday.

The hosts worked hard to build a territorial advantage in the first half but took wrong options at crucial moments, not least in misdirected kicks and wayward passes.

Ealing were able to counter-attack effectively and although they entered Henley’s 22 just three times in the first 20 minutes, they made use of their formidable forwards to score on each occasion and create a 17-0 lead.

When Henley did run at their opponents they looked dangerous and it was Rhys Edwards who pierced open the Ealing defence to score a well-taken try that Jamie Winch converted.

From the subsequent kick-off, Ealing made their way deep into Henley’s half where they were able to turn over possession and score a fourth try to establish a commanding 24-7 lead at the interval.

The half-time team-talk inspired a sense of urgency in the Henley performance in the second session with fine expansive and interactive rugby extending the Ealing defence.

Fullback Will Parton ran hard from far out to initiate an enterprising passage of play that saw Henley’s backs and forwards rifle passes across the field for Adam Porter to dive over in the corner.

Henley were playing with purpose and power as Sam Williams, Henry MacLeod and Ed Houghton influenced their well-drilled scrums and line-outs, whilst Tom Grenfell, Callum Brady and Sam Butler brought off grand tackles on their opponents. Scrum-half Ben Venner took the ball to the Ealing line from where attacking movements crisscrossed the field until Morgan Macrae embarked on a 30-metre charge in which he handed off several defenders to score a fine try.

From the kick-off, another good run from Macrae resulted in a deft reverse pass at pace to Tom Priestley, before an off-load was made to Winch who underlined the importance of backing up in scoring a try which he then converted.

The game was evenly poised at 24-24 but the robust muscularity of the Ealing pack set up a
final try against gallant hosts.

In the last few minutes, Henley attacked their opponents’ line with Harry McEwan and Henry Heath to the fore but desperate defence and the bounce of the ball prevented a final score.