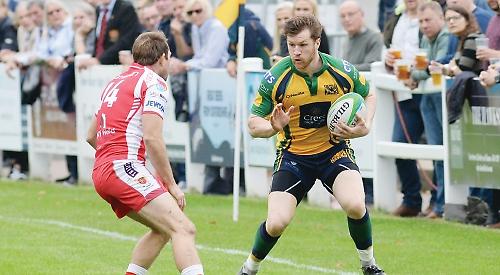 IF you score six tries down in the Duchy you will have expected to win the game. However, the home side went one better and converted more to give them a deserved 11 point victory.

After last week’s poor performance when the Hawks failed to get on the score sheet they produced this week some fine attacking rugby which underlined their potential. However, mistakes were to cost them dear as handling errors and some indifferent decision-making allowed the home side to always be in front. In an entertaining end-to-end match both sides were intent on running the ball from everywhere. In this respect Redruth’s flying winger Ducker was able to capitalise on a hat-trick of tries to produce a fine performance.

The first try came after a minute as a mistake by Henley exiting from deep was pounced on by Ducker to race away and score under the posts. In reply Jack Robinson showed his skill and pace by racing in for a good score almost immediately. The see-saw nature of the game continued as George Primett was driven over again after Redruth had briefly taken the lead.

Immediately prior to the interval Robinson again split the home side’s defence apart to score his second try to send the visitors in just two points adrift and all set for a rousing second half. It was important that Henley grabbed the initiative but Redruth got on to the score sheet early on with Ducker again doing the damage.

To their credit Henley refused to lie down and Tibbatts was on the end of an effective driving maul to once again reduce the arrears. However, an error from the Hawks deep in the
Redruth half led to a good counterattack and for Redruth to put some daylight on the scoreboard.

Sam Portland was able to latch on to a chip through to score wide out for the Hawks’ fifth try and Scott White added the final touch in the closing minutes as he was driven over from an effective forward drive. In the end Jackson was able to convert four of the tries and perhaps the Hawks were frustrated not to get a further bonus point by not taking all of their chances. Frustratingly Henley committed too many errors and Redruth took full advantage of this.

With a week off from league rugby the challenge of Taunton Titans at home on March 3 will be testing and certainly the
error count will have to be reduced.