Solowin bags hat-trick as Waterloo are put to sword 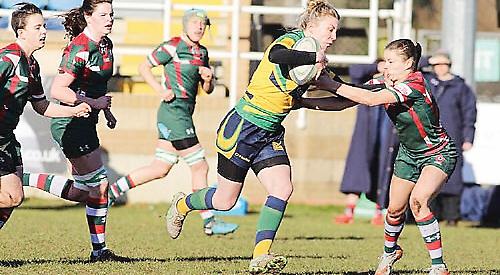 HOME side Henley Hawks Women bowed out of this season’s Senior Cup despite easing to a 33-5 home win against Firwood Waterloo. The Dry Leas side exited the competition after finishing third in their pool.

Henley started strongly putting early pressure on which resulted in Waterloo giving away an early penalty, having not retreated 10 yards as the visitors found themselves playing with 14 players.

The hosts took full advantage of this mauling the ball over the line for Wysocki-Jones to score. Unfortunately Craig couldn’t add the two points.

Receiving the ball from the kick off Henley started to work their way back up the pitch but a knock on allowed Waterloo to pick the ball and dart down the touch line to level the scores at 5-5 after 20 minutes.

Having taken an early knock Wilke made way for Solowin who came on hitting good lines and being disruptive in defence.

Solowin, with her hands on the ball, saw a gap and was through with three defenders to beat. She sidestepped to beat the first, handed off on the second and sheer strength for the third saw her power over the line. Craig kicked the conversion to put Henley 12-5 up.

Henley were a little slow out of the blocks in the second half giving away a few penalties which allowed Waterloo into the half but Collins, Simpson and Dudding led the way in defence, putting pressure on Waterloo’s attacking play and forcing errors. A Henley scrum allowed a clean ball for Davidson to distribute to Dudding who took the ball to the line and held on to it for an extra second to give to Solowin who stormed in for her second try. Craig added the conversion. Balmer now on the field for Collins ran hard at the re-start, keeping the ball alive and popped it to Ashman who straightened the line and made good ground.

Quick forward balls for Davidson to Wheeler and Wysocki-Jones got Henley metres up the pitch and into the 22. Craig spotted a gap and burst over the line before converting her own try to give Henley a 26-5 lead.

With Waterloo now tiring Henley started to bring on the fresh legs of Sealey, Timmins, Kingman and Davies who all made an impact despite some of them having to play out of position.

Henley were determined for one more score. Strong running by Craig and good support play from all led to Solowin going over for hat-trick.