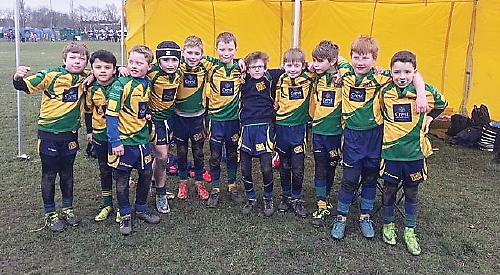 Playing in two leagues the Henley Gold and Henley Green teams, who have developed well over the last two months, finished with eight wins and two draws from 10 matches playing some good attacking rugby combined with a strong defensive effort.

The Henley Green team only conceded one try and scored 17 in the process of winning all five of their matches. Fine tackling and team contribution ensured they dominated proceedings from start to finish with Thomas Ferguson’s game management being the highlight as he ran in a number of tries.

Will Masterson played a physical number of games with the opposition struggling to stop his running and in the process he scored some fine tries. Felix Baker put in some huge hits as he put the opposition on the back-foot and floor.

The Henley Gold team started off with a 2-1 win against hosts Richmond with Luca Coleman and Jack Renders bringing some attacking flair to the proceedings. The Gold team started slowly but through determination worked their way into each of the games and always finished strongly. One of the most closely fought encounters was against London Scottish which Henley won in the dying seconds with a try in the corner from Luca Coleman. The Blackheath game also turned into a battle with one of the opposition being almost adult in size but the Gold team tackled strongly with George Bottomley, Rob Murdoch and Joshua Turner tackling hard. Freddie Coultas demonstrated his attacking flair with a well-taken try in the corner to win 3-2 against Blackheath.