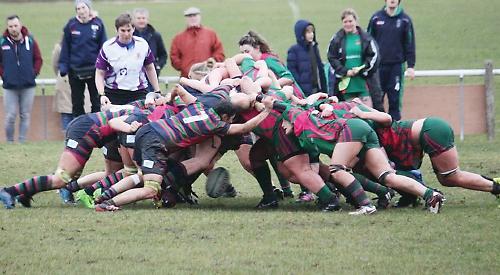 The victory for Jacky Reynolds’s side sees the Nuns leapfrog Newbury Ladies into second place, just one point behind Guildford Gazelles – whom they will play next – and with a game to spare.

Abbey ran in an impressive eight tries en route to clinching a vital bonus point which they needed to aid them in chasing top spot, in a dominant display.

Alice Denton crossed twice as the Nuns started on the front foot after being fed by the quick-thinking Ellie Rice before pouncing on Annette Tomas’s grubber moments later. But Drybrook responded when their fly-half muscled her way over the line after a period of possession and an ensuing penalty.

Lou Burgham grabbed Abbey’s third to qualm fears before the break, after which Abbey turned up the heat.

From the resulting scrum, the Abbey turned up the fluidity with the backs running the ball and clever hands from Tomas, Denton, Matthews and Burgham almost released winger Sarah Northover in the corner.

The floodgates then opened and Denton grabbed two more before Claire Stevens claimed one with a strong powerful run off Rice.

Burgham finished off proceedings by running a short line to score her side’s eighth to give her side the upper hand heading into their all-important clash against the table leaders on March 25.