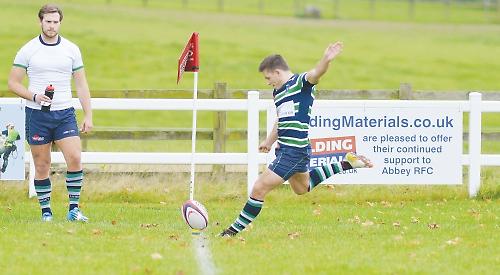 ABBEY were by no means disgraced in their game at Beaconsfield, despite losing 37-6 and conceding six tries. The visitors were competitive throughout and they remained positive in their approach even when injuries to key players threatened to disrupt their rhythm but ultimately they were beaten by the better side.

Beaconsfield have a large, mobile pack, together with a pacey set of backs. Their forwards attempted to break through early in the game, but Abbey’s pack countered well, with second row Jeremy Knights and flanker Ed House making important tackles to stop second row Sam Cartwright and number eight Callum Wilkinson.

Clever interpassing from the home forwards took play to Abbey’s line and after flanker Ken Kavanagh made the initial thrust, prop Jack Hopkins plunged over on the right for an eighth-minute try. The conversion was short of the target.

Soon after Abbey were awarded a penalty and Dampies took a quick tap to winger Diego de Marcilla Bahlsen. Bevan supported well, as did hooker Ollie Charlton. Number eight Mike Beckly took the ball into the home 22, Dampies kicked ahead, and centre Charlie Shackleford followed up well, only to see the ball elude him as he chased it over the Beaconsfield line.

Centre Ben Mitchell began the next Abbey attack, running well into space before Bevan, de Marcilla Bahlsen and flanker George House took play to the left inside the Beaconsfield 22. Knights lost the ball in the tackle as he tried to charge through the middle, but Abbey kept up the pressure and were awarded a penalty. The kick was not an easy one — 38 metres out and to the right of the posts — but de Marcilla Bahlsen struck it well to register Abbey’s first points of the afternoon at the end of the first quarter.

Home winger Dan Cady made a promising break and Mitchell did well to stop him. Fullback Owain Griffiths ran 30 metres but when scrum half Gerry Goss kicked towards the corner, Dampies was able to cover the ball and touch it down for a drop-out. Then, after some good rucking from Abbey, Mitchell made a 30-metre break into the Beaconsfield 22. A try looked on, but he failed to find the supporting Dampies with his pass and an opportunity was lost. Abbey were awarded another penalty and once again de Marcilla Bahlsen judged his kick to perfection to put his side ahead.

Unfortunately the lead was only a brief one, and after Charlton was penalised for holding on to the ball, Lewis landed an easy kick to make it 8-6.

Good handling from outside half Jack Lambert-Taylor, Shackleford and Ed House saw Abbey break from just inside their 22. Dampies kicked ahead, but an unlucky bounce again gave Beaconsfield possession, albeit well inside their own half. To their credit they counterattacked well through Lewis, and after his winding run had taken play back into Abbey’s 22, Goss was up in support to cross for a try on the left. Lewis could not convert.

A fourth try followed soon afterwards, with Cady making the running before Labri dived over in the left corner with two Abbey defenders holding on to him. This gave Beaconsfield their bonus point and another touchline conversion from Lewis extended their lead.

Abbey remained positive in the final minutes of the half, and they actually looked more likely to score during this period. Knights, Bevan and Shackleford combined well in a move which saw Seabourne halted close to the line, and then Mitchell came close to scoring following a good build-up from Lambert-Taylor and Shaw. Unfortunately, Mitchell sustained a head injury when he was tackled, and Abbey lost their most penetrative back. Glynn Webster came on in his place.

Trailing 27-6 at half-time, Abbey began the second half with a rearranged side. Webster slotted in at number eight with Beckly moving into the centre, where he looked impressive whenever he got the ball.

A fine 30-metre break from Shaw nearly opened up the home defence, but Abbey conceded a penalty and Beaconsfield counterattacked. Abbey were dealt another blow when George House suffered a nasty knee injury near his own line. His departure saw de Marcilla Bahlsen slot in on the flank with Daniel Norville coming in on the wing.

The second half was 30 minutes old and no score had been registered since the interval. However, with 10 minutes of play remaining Beaconsfield finally broke the deadlock when Cartwright ploughed over from close range after a lengthy spell of pressure. Lewis could not convert and again Abbey tried to attack from the restart.

With a couple of minutes remaining, home flanker Chris Creek was yellow-carded, and Abbey launched one last attack through Bevan and Ed House. But Beaconsfield had the final word when replacement hooker Simon Tattersall released Labri and the winger finally eluded the brave efforts of Seabourne to sprint clear on the left. By this time Lewis was off the field with a cut head, and centre Matt Brown saw his conversion attempt bounce wide off a post. The game ended immediately afterwards.