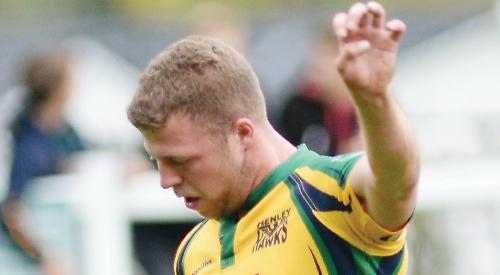 HENLEY HAWKS’ reasonable away form continued as they produced a convincing maximum five point win to leapfrog hosts Bury St Edmunds who were one place above them in the table at the start of the day.

The opening stages started brightly for the visitors as they showed endeavour and enterprise in attack and a solid defence ensured that chances remained rare. However, the first half developed into a turgid affair with the Henley backs failing to capitalise on the good platform that the forwards were creating. As a result there were few scoring opportunities and the game failed to flow and continuity was at a premium.

The opening score came for the home side when a missed defensive opportunity allowed the Bury St Edmunds flanker to pick and dive over from a ruck some five metres out.

This was as good as it got for the hosts as Henley were able to take reasonable control with some fine set piece control. They dominated the line-outs through Hyde and Lowe but were frustrated as a solid Bury St Edmunds defence refused to yield. As the half progressed some good pressure on the home side line resulted in Jackson kicking a straightforward penalty as the home side continued to infringe close to their line.

A turning point in the game came right on half-time when Henley shoved the Bury pack backwards for some five metres and a penalty was awarded. This was to set the tone for the second half when the Henley eight took control.

From good set piece shortly after the kick-off Robinson was to get the first of his three tries as the forwards dominated the loose and produced some quick ball for the fullback to squeeze in at the corner. A touchline conversion from Jackson opened up a five point lead which they were to improve upon as again Robinson latched on to a good handling movement and showed real pace to get outside the defence and score in the corner.

The decisive score came on 60 minutes when Henley had worked themselves into a commanding position inside the hosts 22-metre area. Eventually a five-metre scrum was awarded and Henley drove towards the try line. Bury collapsed the scrum illegally and a penalty ensured. Sensing the hosts’ scrum were tiring the Hawks opted for another scrum. Once again the front row of Cook, Emery and Morris dug deep as the Bury pack went backwards, again the scrum collapsed referee Ben Wilde had seen enough and awarded a penalty try.

With an 11-point lead Henley should have pushed on for the bonus point try and completely close out the game but as on so many occasions this season a lapse in concentration allowed the Bury flanker in for his second score of the day and to reduce the arrears once more to four points.

With 10 minutes remaining the game was poised for a dramatic finale before a fine break by Butler and a clever chip kick over the defence saw Robinson win the chase for the touchdown to secure the much needed bonus point and a nine-point cushion.

Bury launched a last-ditch attempt to secure a losing bonus point for themselves but a huge defensive effort from the entire team ensured nothing was to cross the visitors’ line and Henley held out for a deserved point away win.

After a run of indifferent form the Hawks showed in the second period of the game some real desire to attack and defend effectively. The set piece is improving each week and this is vital to secure the quality possession needed to test opposition defences. With more clinical finishing and more accurate handling this team has the ability to reach its target of a top five finish.