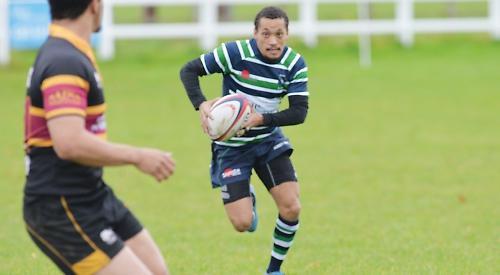 ABBEY head coach Luke Harding recorded his first win in charge of the side as the hosts secured the derby spoils in a tight encounter with their Sonning rivals at Rosehill on Saturday.

Returning captain Will Bevan, sidelined after the last bruising derby encounter with a fractured collarbone, scored the only try of the afternoon as both sides battled with a harsh wind and the numbing cold.

With the wind behind them, Abbey dominated the first half of the game as Reading struggled to gain territory with the wind steering any clearance kicks off course.

The pack made strong carries, led by the impressive Jeremy Knights and Maurice O’Connell, and threatened the Reading line several times before broaching it just before half-time.

Ill-discipline from Reading saw their winger shown the yellow and Abbey capitalised on this advantage with a driving maul, leaving a small gap for scrum-half Bevan to dive over. Flanker Matt Gingell was unlucky with the extras as the ball bounced off the uprights.

With moments to go until half-time, Reading erred again with a high-tackle, causing the referee to reach for his pocket again, and Abbey extended their lead with a well-struck penalty kick from Gingell to give them an 8-0 lead at the break. In the second half, Reading enjoyed the conditions that Abbey had had in the first half, and tested the Abbey backs with probing kicks, which the Abbey back three of Dampies, Norville and Seabourne returned with gusto.

Although Abbey’s attacking opportunities were slim, their defence was outstanding and time after time marched Reading back up the pitch. Mike Beckly, starting at inside centre for the first time, lead the back line well in defence with crunching tackles, while the pack were superb, turning over two scrums against the head.

Reading continued to threaten the Abbey line however, and they finally registered some points when prop Ollie Charlton was penalised for illegal scrummaging, the referee racing under the posts to award a penalty try. If anything, this spurred the home side on to step up their defence further, even when Chris Shaw was shown the third yellow of the game after a penalty at the breakdown.

In bitterly cold conditions, the game was moved pitch with only three minutes left to play after a serious injury to a Reading player, yet Abbey could sniff the win now and the pack ran down the clock with a series of strong carries before captain Bevan had the delight of kicking the ball off the pitch.