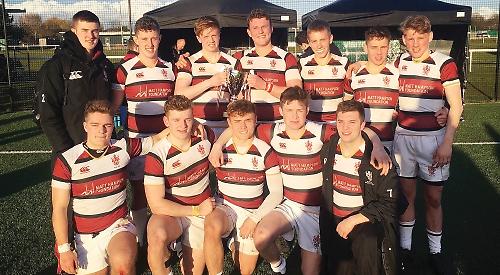 Shiplake then faced Reading Blue Coat B which was a cagey affair for the first three minutes. However, Shiplake adapted to the opposition and found themselves six tries up at half-time through Booth (2), Acton, Fitzgerald and Ashcroft (2). Further tries by Booth and Acton put the game out of sight as Shiplake triumphed 48-5.

Next up Shiplake faced a sterner challenge against Halliford but were four tries up at half-time through Acton, Ashcroft, Fitzgerald and Booth. Shortly after half-time Smyth danced through the Halliford defensive line to score under the posts. Halliford hit back with a well worked try of their own but Booth had the last act of the match scoring a 50m solo effort and dotted down under the posts to give his side a 38-7 win.

Against last season’s finalists Reeds, Shiplake went behind after two minutes. Shiplake hit back as Ashcroft scored two well worked tries as his side led 14-5 at half-time. The first five minutes of the second half was end to end with good tackling from both sides. Robbie Cartwright found a gap midfield and ran 60m to give Shiplake some breathing space at 19-5. Reeds, desperate to top the group, hit back with two tries but time ran out giving Shiplake a narrow 19-17 win to secure their spot in the semi-finals.

Facing old rivals Reading Blue Coat A in the semi-finals Shiplake were hindered by losing two players for the remainder of the tournament through injury.

Blue Coat scored in the first minute, but once the nerves had settled Ashcroft and Acton managed to cross the try line to put the score at 12-5 going into the break. After the break Blue Coat came back with a try of their own but Booth put the game to bed to secure his side a final spot with the 19-15 win.

In the final against Llandovery early play saw the ball change hands between sides a number of times before Fitzgerald showed some pace around the outside of his opponents’ defensive line to score the first try of the game.

Llandovery hit back with a penalty try after a Shiplake player killed the ball at a breakdown on his own five-metre line.

Llandovery started the second half with a well-worked set play from the scrum and dotted under the posts. It was starting to look out of reach for Shiplake but Acton found a weakness in the strong Llandovery defensive line and scored to bring the score to 14-10 with one minute to play.

Shiplake regathered the kick-off and looked composed on the ball. Booth spotted a gap, backed his pace and in what was the final play of the match, scored the winning try to give his side a 15-14 win.