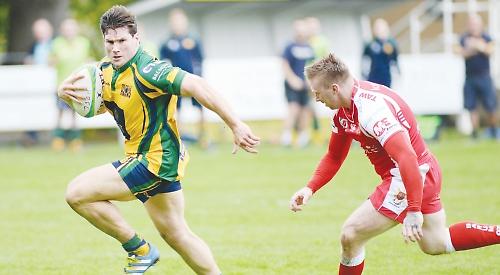 This National Division 2 fixture has been postponed twice previously due to snow and will take place at Dry Leas with kick-off at 2.30pm.

The Hawks have made changes to the front row following last week’s error-strewn 30-30 draw with Canterbury.

Brad Cook will be having his first game at hooker, rather than prop, and Dave Manning has been brought in as tight head prop.

Meanwhile, in the backs, Simon Perry will take over from Alan Awcock for the match, which is only the second home fixture in a month.

Scrum-half George Jackson will be hoping to carry on where he left off last time out which saw him flawlessly convert three tries and three penalties to score 15 points.

His contribution was decisive considering that Canterbury out-scored the Hawks as far as tries were concerned, registering five tries.

The Hawks were only spared defeat by their kicker Best who did not live up to his name by only being successful with two kicks out of seven and missing a fairly straightforward penalty on the 80th minute to win the game. However, the Kent side had the small satisfaction of scoring three league points to the Hawks’ two, who too took some satisfaction in drawing the game after losing earlier in the season by one point at Canterbury.

On that occasion, the Hawks missed out on the win when, with the last kick of the game, their place kick crashed against an upright and so lost the match 24-25.

In contrast, Taunton started the season in fine form and enjoyed an unbeaten record which stretched from the opening day to November 4. But they suffered a shock at the hands of an unpredictable Hawks side who claimed an unlikely 42-31 victory.

Taunton are now fourth in the league on the back of a 31-15 defeat to Redingensians at Bath Road last week and this unpredictable form ended all prospects of promotion from the league.

The Hawks will nevertheless be on their guard against Gary Kingdom, the former Exeter Chiefs full-back, who has amassed 201 points for his side while Anon Strumanski is their leading try scorer with 17.

The hosts will be hoping to improve on the pitch as they still have a target to finish the season in the top six but Taunton will be a tough challenge.