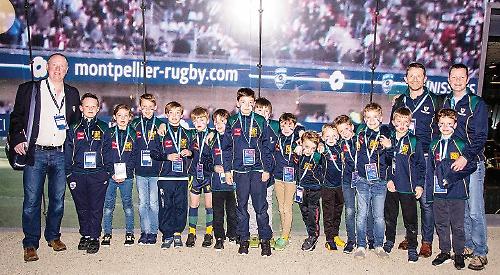 FIFTEEN players from Henley Hawks U9s travelled to Montpellier, to compete in some friendly matches and go behind the scenes of the French club.

Montpellier, currently leading France’s Top 14 league, arranged for the players, coaches and parents to stay in their academy accommodation and shortly after arriving they were treated to a behind-the-scenes tour of the stadium with detailed insight into how Montpellier players prepare and train and what happens on match days. The Henley youngsters also met current coaches and players, including New Zealand World Cup winner Aaron Cruden.

Saturday saw the Hawks play in two series of matches. In the morning they trained with the Montpellier U9s and then played mixed matches with their hosts. After lunch the teams met up with local club Juvignac. The Hawks, who only started contact rugby at the beginning of the season, got a sense of how French rugby differs from English. In France players learn to tackle, ruck and maul from the age of six and this experience showed in the early skirmishes. The Hawks managed to adapt in the latter stages and put in some fine handling and running displays but were beaten in their games.

On the Saturday evening, the Hawks presented Montpellier with a framed club shirt, which was accepted by Montpellier and South Africa star, Jan Serfontein, before they formed a guard of honour at the Altrad Stadium for Montpellier’s home match against Castres.

After watching the home side brush aside the visitors in a 45-7 victory the players, coaches and parents were taken on to the pitch for photos with the victorious team. They also met club chairman Mohed Altrad who, along with Hawks father Mark Clifford, had made the whole trip possible.