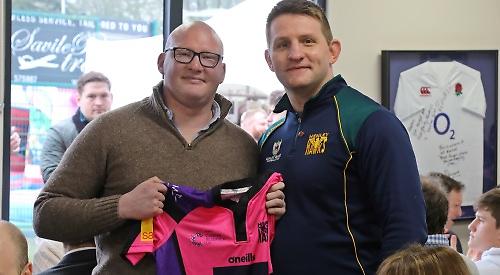 The event took place to coincide with the Hawks’ game against Canterbury at Dry Leas and the team wore pink shirts made specially for the occasion.

The match ball was presented by Hawks player James Comben, 29, who is currently undergoing treatment for T-cell lymphoblastic lymphoma, a form of blood cancer.

Before the game there was a lunch attended by 190 guests which included a raffle for the charity.

The event also included a beer festival organised by the Loddon Brewery from Dunsden Green, which is a club sponsor.

There were 20 ales on offer, including Loddon’s Gorgeous George, which is brewed every spring to mark St George’s Day, and Brakspear Special, which is brewed at the Bull on Bell Street in Henley.

There were live performances by bands and a bouncy castle and face painting for children.

Alistair Beynon, the club’s commercial manager, said: “It was a fantastic day. There was an awful lot going on as we wanted to be inclusive and not alienate women or children. The beer festival was particularly successful and enjoyed a high turnout.

“It was poignant welcoming James, who is still undergoing treatment, and we wish him all the best and hope to see him back on the pitch again soon.”