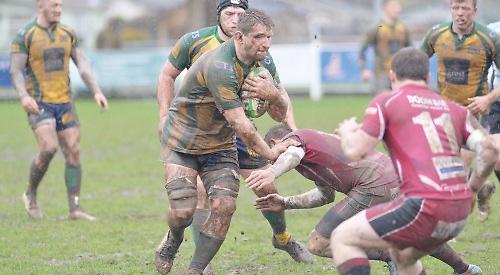 IT was a case of déjà-vu for Henley Hawks as a last-minute Gary Kingdom penalty gave Taunton Titans a narrow victory against the hosts in atrocious conditions at Dry Leas on Good Friday, writes Alistair Beynon.

The Hawks scored first following a good break from Sam Portland. A quick tap penalty in the Taunton 22 sent Connor Hayhow through under the sticks. George Jackson converted.

Taunton soon responded following sustained pressure in the Hawks half with Ben Oliphant-Thompson powering over from close range. Kingdom converted.

Henley re-took the lead through Hayhow following a piece of individual brilliance dodging several tackles before going under the posts untouched. Jackson once again converted.

A Jackson penalty built a 10-point cushion before Taunton hit back on the stroke of half-time after Joe Butler’s kick was charged down and Oliphant-Thompson crashed over again to reduce the gap to three points at half-time with Kingdom again adding the extras.

A Kingdom penalty on 50 minutes levelled the scores at 17-17 before Taunton were reduced to 14 men by the sin-binning of Stu Persey for a high tackle.

However, Henley couldn’t make the numerical advantage count before the last 10 minutes of the match descended into chaos as the heavy rain made conditions almost unplayable.

Taunton adapted better to the heavy rain and were rewarded with a penalty on the stroke of full time which Kingdom calmly converted, just as he did at Dry Leas at the same time last season, to secure victory for the visitors. Despite the defeat the Hawks, who gained a losing bonus point, moved up to sixth place in the table.