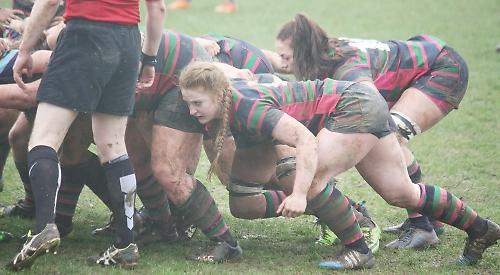 ABBEY NUNS celebrated their last fixture of their regular season with an emphatic bonus-point victory over Teddington, writes Fiona Tomas.

The hosts chalked up seven tries en route to inflicting a 45-10 drubbing on their London opponents, who stayed in contention during the first half.

But Jack Reynold’s side upped the tempo to increase their 12-10 advantage at the break with a dominant second-half display, in which they didn’t concede once.

The result saw the Rosehill outfit bring the curtain down on another successful season and sees them finish an impressive nine points clear of second place in Championship South West 2.

With the league title secured, it was a prime opportunity to blood some players and several did not disappoint.

Gabriella Millard set the early momentum with a storming run from inside her own half, after which the fiery Chloe Sharman ran the length of the field only to be denied courtesy of a heroic try-saving tackle by Teddington’s fullback.

It was Sharman in particular who impressed at outside centre and galvanized a much-changed Abbey back line throughout the first half with her attacking presence.

Pippa Robinson, too, stepped up to the mark and opened proceedings after 10 minutes played, cleverly exploiting a gap in Teddington’s defence to dot under the posts in a stop-start first-half.

Nat Mitchell crossed from close range moments later as the Nuns mounted a 12-0 lead – largely down to ground made through carries by Harriet Driver and Emily Henderson along with Annabel Hawkins who tirelessly steadied the ship in defence.

It was Driver who was the anchor of the much-changed Abbey forward pack and made several strong carries.

Hayley Matthews stepped up to add the extras, slotting the conversion neatly through the uprights.

Teddington responded with two tries in quick succession – the first with their pacey prop going over followed by a quick tap-and-go from their scrum-half on the cusp of half-time.

But the visitors struggled to capitalise on the momentum switch as Abbey emptied the artillery on their bench to power away in the second period.

Annette Tomas began the frenzy, chasing her own overhead kick before executing a neat grubber which she pounced on over the whitewash.

Alice Denton grabbed her first shortly after when she broke from midfield and scored again minutes later in a superbly worked team try.

Hawkins used her foot to salvage the ball from an ensuing Teddington hand, kicking it across Abbey’s line for Denton to scoop up and drive over. Teddington were handed a yellow card for verbally abusing the referee, before Tomas rounded off with her second.