Overwhelmed visitors have no answer under Dry Leas lights 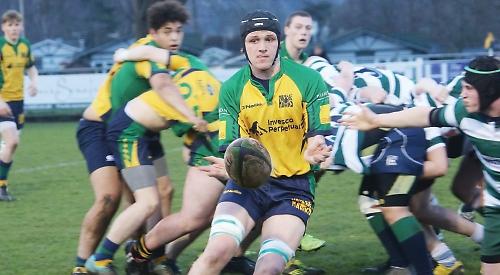 HENLEY Hawks Colts produced a dazzling performance to outplay Reading 73-0 in a league encounter under lights at Dry Leas on Friday of last week.

The hosts triumphed by virtue of a well-drilled expansive and interactive game allied to a watertight defence.

A hard crash-tackle by Adam Porter in midfield set the tone for his side’s dominant display as it allowed Rhys Edwards to pounce on the resulting loose ball and race away to open Henley’s account.

Minutes later Henley stole a line-out off Reading and James Rhodes put in a great pass for Callum Brady to finish the move in style, shaking off two defenders to score.

Elusive running from Ben Stacey and Harry Wray set up the next score in the corner by ever alert scrum-half, Ben Venner, who had followed up to good effect.

Collecting the subsequent kick-off deep inside their half, Henley ran the ball in a thrilling movement that featured several switches of direction before Wray opened up the last line of defence and registered another sparkling try. Venner scored his second try soon afterwards, feinting and weaving a path through clutching defenders to dot down under the posts.

There were two further tries before the interval from Porter who displayed admirable power and pace, whilst Matt Dalrymple kicked five conversions to give Henley a commanding 45-0 lead at this stage.

Henley’s handling throughout was outstanding – a reflection on the hard work at practice – and another fine movement enabled Wray to record the first try of the second half.

Captain Tom Priestley was conspicuous in further flowing interplay involving backs and forwards that culminated in Scott Carey leaving several defenders trailing in his wake to score a well-deserved try.

Thereafter, Wray, a fine finisher, secured his hat-trick of tries and the wide-ranging Rhodes added one more, with Dalrymple responsible for all four second-half conversions.

Despite the margin of victory, Reading showed great spirit and determination throughout and it required dogged defence to prevent a consolation score.