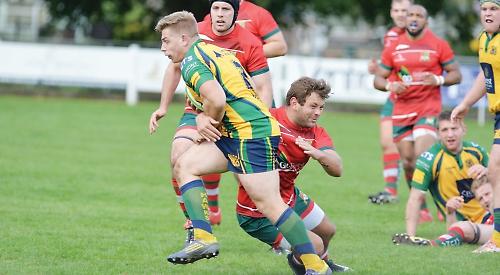 A BELOW-PAR performance saw Henley Hawks slip to a surprise defeat away at Clifton, a side trying to get away from the Division 2 South relegation zone, last Saturday.

Winning a line-out five metres from the Clfton line gave lock David Hyde a chance to crash through to touch down for Hawks’ reliable kicker George Jackson to add two points.

It is rare to see a turning point in a game so soon after the start. This was one of those occasions for Clifton swept down the pitch and past some ineffective tackling for fullback Callum Roberts, their leading try scorer, to touch down in the corner for fly-half Brad Barnes to convert to level the scores.

During the rest of the match the Clifton tackling was much more effective than the Hawks as they strove to get the points to avoid relegation. They began to put the Hawks’ scrummage under pressure close to their line and referee Jack Sutton judged that the visitors’ experienced prop Dave Manning had offended to such an extent that he awarded a penalty try which gave Clifton a 14-7 lead.

The Hawks were having difficulty in understanding the referee’s interpretation of releasing a player in the tackle and were penalised six times which served to keep them under pressure. However, 20 minutes into the game the Hawks earned a penalty 20 metres out and Jackson obliged to reduce the arrears to 14-10.

Although enjoying copious possession the Hawks found difficulty in scoring points showing little penetration in attack and not at all slick in their handling. Clifton did just this when Will Pomphrey was put away to find space to increase their lead to 19-10.

The Hawks took play to the Clifton line and putting their defence under pressure conceded a penalty try, on a tit for tat basis on the stroke of half-time when the score stood in favour of Clifton, 19-17.

The second half witnessed a slow start by the Hawks in which they conceded a penalty by Barnes. The subsequent lead of 22-17 was increased to 29-17 with a converted try by the Clifton fly-half to put the Hawks under the cosh.

The visitors responded with a try by their foraging hooker Tom Emery who forced his way over for an unconverted try and were unlucky when Clifton’s scrum-half Mitch Spencer appeared to be off-side when preventing a Hawks try to draw the game late on.